Gars of the Florida Panhandle

Gars are freshwater fish, but several species have a high tolerance for saltwater.  The alligator gar (Artactosteus spatula) has been reported from the Gulf of Mexico1.  They are elongated, slow moving fish with extended snouts full of sharp teeth – very intimidating to look at.  But swimming with gars in springs and rivers, I have found them to be oblivious to me.  Snag one in a net however, and they will turn quickly and could do serious harm.  While fishing my grandson had one come after his bait once and that was pretty exciting, but it is rare to catch them on hook and line.  Many who fish for them do so with bow and arrow.  Their skin is covered with tough ganoid scales.  You really can’t scale them; you have to skin them. 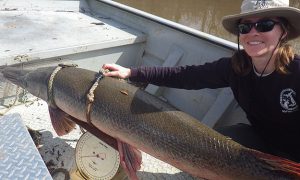 In the book Fishes of the Gulf of Mexico, by Hoese and Moore, they list four species of gar in the northern Gulf.  As the name suggests, the longnose gar (Lepisosteus osseus) has a long slender snout and has spots on the body.  It is the one most often seen by people visiting our springs, rivers, and the one most often seen in our estuaries.  It can reach a length of five feet3.

The famous alligator gar (Artactosteus spatula) has a shorter snout and spots are usually lacking.  If they do have them, the are usually on the fins.  This is a big boy – reaching lengths of nine feet and up to 100 pounds2.  They are common in coastal estuaries and even the Gulf, though not encountered very often.

The spotted gar (L. oculatus) also has a short snout but has spots all over its body.  It prefers the rivers and will enter estuaries only where the salinities are low.  It is smaller at four feet4.

The last panhandle gar is the shortnose gar (L. platostomus).  This species too prefers rivers and may enter low salinity bays.  It has a short snout and lacks spots.

There is a Florida gar (L. platyrhincus) not found in the panhandle but exists along the central and south Florida gulf coast.  It seems to have replaced the spotted gar in this location5.

The biogeography of this group of fish is interesting in that it is an ancient like the sturgeon, it existed during a time period when much of Florida would have been underwater.  The general range of gars is the entire eastern United States.  They prefer slow moving rivers, or backwaters of faster rivers, and are common in springs.  As mentioned, a few species will venture into saltwater and can be found around the Gulf of Mexico.  But with several species there has obviously been some speciation over time. 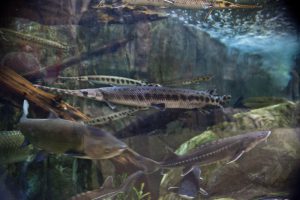 The longnose gars have one of the widest distributions within the group.  They are found in most river systems across the eastern United States and all of Florida.  It seems to have few barriers including saltwater.

Alligator gars have a similar distribution but seem to be restricted from the peninsula part of Florida.  The Florida rivers where they are found are all in the panhandle and are all alluvial rivers – muddy and not tannic like the Suwannee.  This could be due to required food that prefer alluvial rivers, pH (pH is lower in the tannic rivers), or something else.  Though they did not disperse into central and south Florida, they did extend their range westward down into Mexico.  And, as mentioned, have been reported in the open Gulf of Mexico.

Spotted gars follow a similar distribution to the alligator gar.  Much of the Mississippi River basin, Florida panhandle, and west to Texas – but they are not found in peninsular Florida.  Pre-dating the emergence of peninsular Florida from the sea, there was some barrier that prevented them from dispersing south when the landmass did appear.

A different species appeared in peninsular Florida along with the longnose gar – the Florida gar.  It is found in central and south Florida and has dispersed a little north along the Atlantic coast to Georgia.

This is an interesting group of ancient fish.  Some are commercially harvested and have suffered from human alterations of river systems.  They are amazing to see.