Tarpon in the Florida Panhandle

This is a famous fish.  If you look back at the old tourism magazines of the early 20th century you will see a lot about tarpon fishing in Florida.  As a matter of fact, some say that tarpon fishing was the beginning of the tourism industry in the state.  Also known as “silver kings”, they put up a tremendous fight which anglers love, particularly on lighter tackle.  It is a sport fish, not sought for food, so catch and release has been the rule for years.  But those who seek them will tell you it is worth the fight even if you must release it. 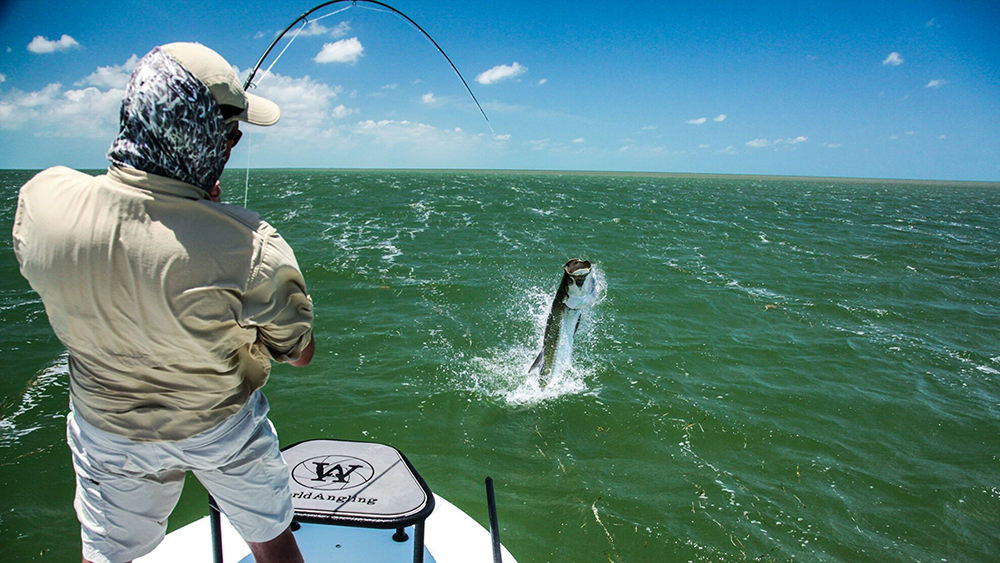 Tarpon have been a popular fishing target for decades.
Photo: NOAA

Tarpon (Megalops atlantica) are large bodied, large scaled fish, with a deep blue back and silver sides.  They are a large fish, reaching over 8 feet in length and up to 350 pounds.  They tend to travel in schools and are often associated with other fish, such as snook2.

It has always been thought of as a “south Florida fish”.  As mentioned, down there it is a popular fishing target for tourist and residents alike.  Many charter captains specialize in catching the fish and they have been featured in fishing programs.  But you do not hear about such things in the Florida panhandle.  Hoese and Moore1, as well as the Florida Museum of Natural History2 both indicate that they are in fact in the Florida panhandle.  As a matter of fact, this fish has few barriers and has the distribution of the classic “Carolina fish” group.  That includes the entire eastern seaboard of the United States, the entire Gulf of Mexico, and the Caribbean1.  The Florida Museum of Natural History indicates they are found on the opposite shores of the Atlantic Ocean and may have made their way through the Panama Canal to the Pacific shores of the canal.  Within this range they are known to enter freshwater rivers.  They seem to have few biogeographic barriers.

I grew up in the panhandle and remember hearing about them swimming in our area when I was younger.  Fishermen said they would throw all sorts of bait at them.  Artificial lures, live bait, cut bait, you name it – they tossed it… the tarpon never would take it.  Catching one here was almost impossible.  The flats fishing charter trips for tarpon in south Florida would not happen here.  I remember once diving in Pensacola Bay near Ft. Pickens.  We were looking for an old Volkswagen beetle that had been sunk years ago when at one point the water became very dark – almost like storm clouds had rolled in.  When my buddy and I both looked up we saw a school of very large fish swimming above us.  We were not sure what they were at first but as we slowly ascended, we realized they were tarpon.  It was pretty amazing.

An interesting side note here.  In 2020 tarpon were once again seen swimming around the Pensacola area but this time they WERE taking bait.  There were several reports of tarpon caught off the Pensacola Fishing Pier and inside the bay.  Why change over all this time?  I am not sure.

The ladyfish (or skipjack) is the smaller cousin of the tarpon, but puts up a good fight as well.
Photo: University of Southern Mississippi

Tarpon belong to the family Elopidae which also includes another local fish known as the “ladyfish” or “skipjack” (Elops saurus).  This is a much smaller fish reaching about 3 feet (and that would be a large ladyfish).  The scales of this family member are much smaller, but the fight on hook and line is just as large.  The characteristic that places these two fish into the same family (and these are the only two in this family) is the hard bony gular plate found between the right and left side of the lower jaw (in the “throat” area).

Like tarpon, it is not prized as a food fish but more of a game fish.  It has the classic wide distribution of the “Carolina fish group” – the eastern seaboard of the United States, the Gulf of Mexico, down to Brazil.  Like the tarpon, it is found in brackish conditions but is not mentioned in freshwater.  Again, few biogeographic barriers for this fish.

Both members of this family provide anglers young and old with a lot of enjoyment.