Where Have All the Scallops Gone?

For those who lived in the Pensacola Bay area 50 or so years ago, this question comes up from time to time.  By scallop I am speaking of the bay scallop (Argopecten irradians), the one sought by so many scallopers then and now.  This relatively small bivalve sits on beds of turtle grass, gazing with their ice blue eyes, filtering the water for plankton and avoiding numerous predators.  They only live for a year, maybe two.  They aggregate in relatively large groups and mass spawn.  Releasing male gametes first, then female, fertilizing externally in the water column, to create the next generation. 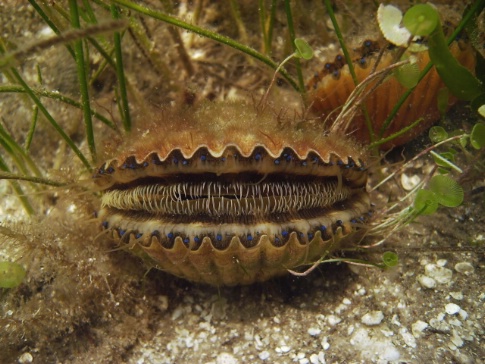 These are unique bivalves in that they can swim… sort of.  When conditions are not good, or a predator is detected, they can use their single adductor muscle to open and close the shells creating a current of expelling water that “pushes” them along and off the bottom.  They were once found from Pensacola to Miami… but no longer.  Scallops have become almost nondetectable in much of their historic range.  Today they congregate in the Big Bend area of the state, and there they are heavily harvested.

Well, if you look at the variety of causes for species decline around the globe habitat loss is usually at the top of the list.  The habitat of the bay scallop are seagrass beds.  There are many publications reporting the loss of seagrasses across the Gulf and Atlantic coast.  Locally we know that the historic beds of the Pensacola Bay system have declined.  We also know that some of those beds have shown some recovery in the last 20 years.  But was the loss enough to cause the decline of the scallop?

Studies show that there is a strong association between seagrasses and scallops.  The planktonic larva typically attached to grass blades a week or two after fertilization.  This seems essential to reduce predation.  Once they drop from the blades, vegetative cover is important for their survival.  This suggests yes – any loss of seagrass could begin the loss of bay scallops.

What about water quality?

We do know that scallops need more saline brackish water – at (or above) 20 parts per thousand (20‰); 10‰ or less is lethal.  Sea Grant is currently working with citizen scientists in Escambia County to monitor the salinity of area waters weekly.  Though we do not believe the data is usable until we have 100 readings from each location, early numbers suggest that locations in Big Lagoon and Santa Rosa Sound are at 20‰ threshold.  We do not know whether run-off engineering of the 1970s may have lowered the salinity to cause a die-off, and one would think (since they can swim) they would move to a better location.  However, if salinities were low across much of their local range, and seagrasses were not available in areas where salinities were good, this could have a devasting impact on their numbers.

Then there is sedimentation.  Studies show that young scallops (<20mm) that do not have seagrass to attach to settle on silty bottoms and their survival is very low.  And then there are toxic metals, and other contaminants that scallops may have little tolerance for.  It is known that juvenile scallops have a low tolerance for mercury.

One study from the Tampa Bay area indicated that there was little loss of scallops due to disease and parasites.

And then there is overharvesting…

Scallops are mass spawners and there needs to be high numbers of adults near each other for reproduction to be successful.  If people are taking too many, this can lead to more spaced adults and less chance of successful fertilization.  This combined with environmental stressors probably did our populations in.

According to a publication from Sarasota Bay Estuary Program in 2010, populations of less than five scallops / 600m2 is considered collapsed.  Sea Grant has been conducting volunteer scallop searches in the Pensacola Bay area for the last five years.  In that time, we have found only one live scallop… we have collapsed.  During the 2021 Scallop Search, 17 volunteers surveyed 4000m2 and found no live scallops.  However, reports of live scallops outside of our surveys indicate they are still there.  We will see what the future holds.