Wildlife on the Beach in March

The month of March is the last of winter.  For todays hike we returned to Gulf Islands National Seashore/Ft. Pickens where it was 63°F, overcast with a strong breeze from the northwest.  A cold front is coming through to remind us that winter is not over yet.  It was not 44°F as it was on our February hike but with the wind and cloud cover, it was a bit cool and not ideal for most wildlife to be out.  But the ospreys were… 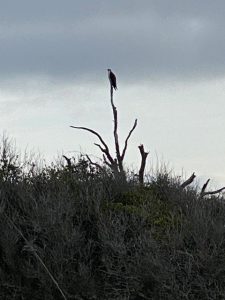 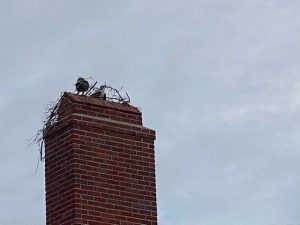 An osprey pair building a nest on the chimney of the ranger station at Ft. Pickens.
Photo: Rick O’Connor 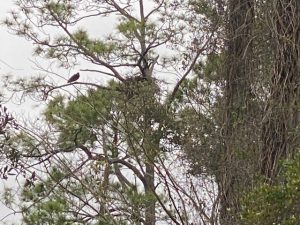 Another osprey pair with a nest in a large pine.
Photo: Rick O’Connor

They were everywhere.  Building nests in live pines, dead snags, platforms built just for this, and on the chimney of the ranger station.  Their sounds were everywhere – it is breeding season for them.  The great blue herons were still nesting, we saw them first in January, but there are still a few around.  American egrets were out as were numerous mourning doves.  As with the colder February day, it was primarily bird action right now.  I did see evidence of armadillos, and would guess other mammals were on the move, but did not see evidence of any others.  The reptiles and amphibians are still missing – but should not be for long. 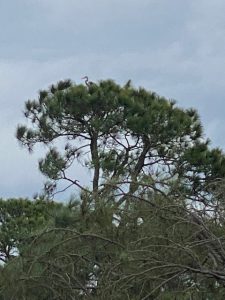 The herons began nesting in January. Some are still there. 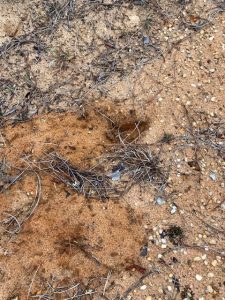 The plant I know as beach heather, many call false rosemary, and has the scientific name Conradina, was in full bloom.  After the hollies of the Christmas season, these are the plants I often see bloom first.  Though I have seen bees around my home already, and wasps, I did not see/hear any insect movement this morning. 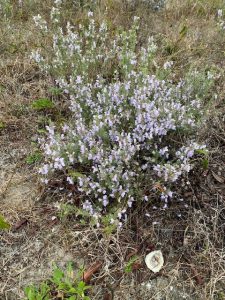 Beach heather (false rosemary) is one of the first plants to bloom on our islands.

The north beach (Pensacola Bay) was rough due to the northwest wind.  It was difficult to see if anything was moving around in the shallows.  There were a lot of shells on the shore.  Two particularly caught my eye.  The Florida Fighting Conch was pretty abundant, more than normal – and there were several scallops shells.  There are two species locally, the calico scallop (often found in the Gulf) and the bay scallop (the estuarine version and the one of “scalloping” fame).  Calcio scallops are often pinkish in color and often with spots.  The bay scallop is usually gray in color.  Those I saw this morning were all bleached white but, based on other variety of shells in the mix, I am thinking these were calcio scallops. 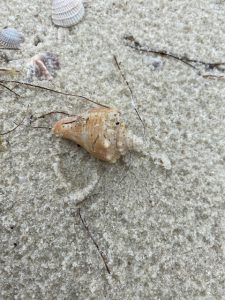 There were several Florida Fighting Conch shells on the beach this month.

There was very little marine debris today and no tracks of any kind seen.  There was only one lone pelican spotted, maybe due to the high winds they settled somewhere else.  Maybe they have moved off to smaller islands for breeding themselves, I am not sure. 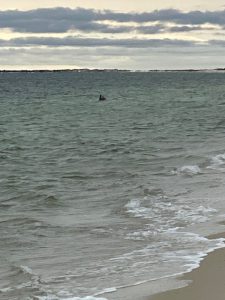 We only saw this one lone pelican today.

Though the wildlife has been more restricted to birds at the moment, the birding is excellent right now and the beach has relatively few people – it is a great time to take a hike out there. 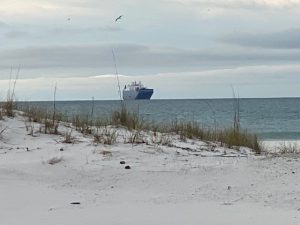 This large tanker awaits its turn to enter Pensacola Bay. 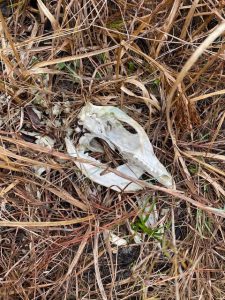 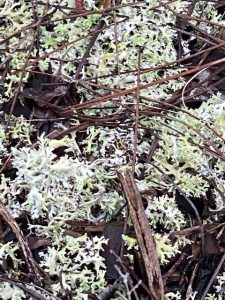 Lichen is an organism that is a partnership between algae and fungus. They were a brilliant white-green this month. 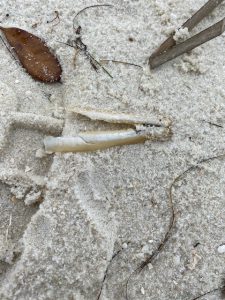 Razor clam shells are quite common along the shoreline. 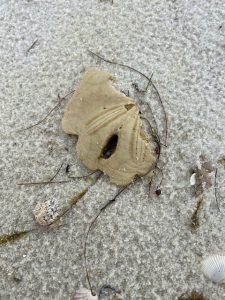 Sand dollars are not as common on the bay side of the island but there were several today. 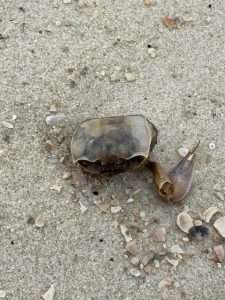 The remains of a ghost crab. 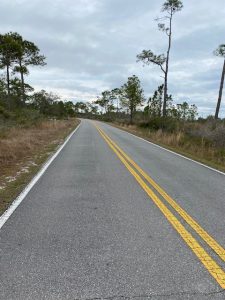 Believe it or not, walking along the road is a great spot to find wildlife.