Imperiled (verb) – put at risk of being harmed, injured, or destroyed.

In 2021 the Florida Department of Environmental Protection classified 44 area waterways in the Pensacola Bay System as imperiled.  Such designations are based on an environmental parameter making it unhealthy for one reason or another.  When we think of an unhealthy body of water, many times we think of sewage.  There are nine bodies of water in the Pensacola Bay System classified as imperiled due to the fecal bacteria concentrations within.  There are another seven for bacteria levels high enough to close them for shellfish harvesting.  This is a total of 16 bodies of water having bacteria issues (36% of the 44 designations). 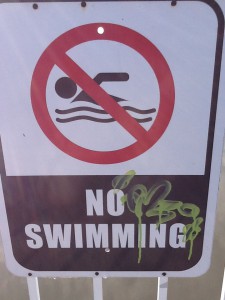 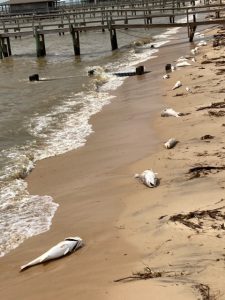 But you may be surprised to learn that 23 of the 44 imperiled water bodies (52%) are designated based on the mercury content of the fish sampled there.

Most people are aware of the mercury issue in fish.  Many of those living in the Pensacola Bay area are aware of this issue locally, but they may not be aware that with the 2021 designations, it is the primary reason for many listed.  To be fair, it is not that mercury issues are increasing, it may be more that there are 97 waterways in the Pensacola Bay System being considered for delisting in 2021 and those are listed for a variety of other issues.  What it is stating is that with the 44 that remain imperiled, mercury is the primary cause. 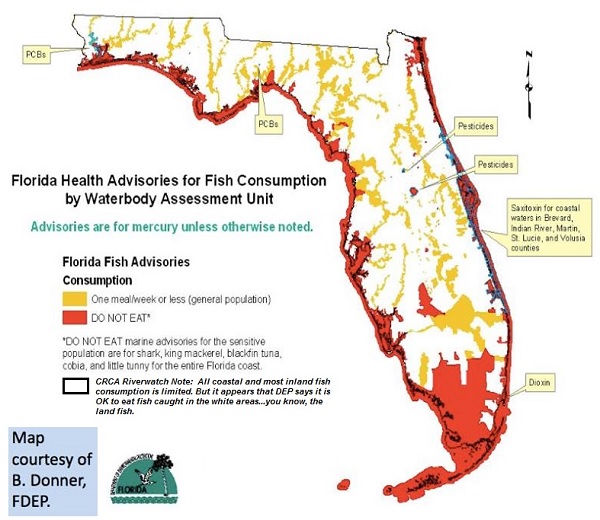 We have all heard of mercury in fish, but where is it coming from?  What health problems does it cause?  And is there anything that can be done to make these bodies of water healthier?

The element has been of interest to humans for centuries.  There are records of it buried beneath the Mayan pyramids, though we are not sure how it was used, and it was used in Chinese medicine centuries ago.  The Spanish used it to help extract silver from mines during their colonial period around the world.  It was also used in separating fir from skin in felt hat making in the 19th century.  Hatters who used this method eventually had neurological problems and became known as “mad hatters”, an idea used in Lewis Carol’s Alice’s Adventures in Wonderland.

In more modern times it has been used in fillings for tooth cavities (including my own) and preserving specific vaccines.  Being a good conductor of electricity and not of heat, it is used in numerous electrical components, fluorescent lighting, and batteries.  Some cultures used it to help “whiten their skin” and a common use is in the processing and production of certain industrial chemicals.  Today, due to the toxic properties of mercury, many of these uses are no longer. 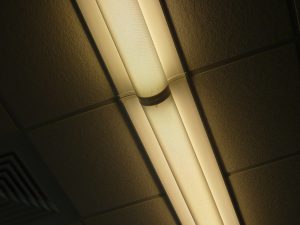 Mercury is obtained for these uses by mining their ores.  The most sought after ore is cinnabar, a red-colored rock found around the world.  Mercury (II) sulflide (HgS) is a common compound found in cinnabar.  When heated and oxidized it will produce sulfur dioxide and elemental mercury. 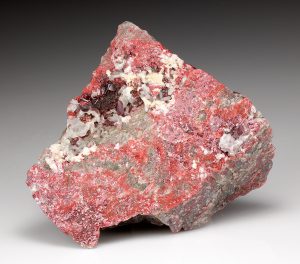 Cinnabar is the most common ore mined for mercury.
Photo: Classic Crystal

The problem with mercury is that it is toxic, and some forms of mercury are more toxic than others.  The element is known to cause brain, kidney, and lung issues.  It also can weaken the immune system.  It is most known for the neurological problems it causes.  Sensory impairment, lack of motor skill coordination, psychotic reactions, hallucinations, tremors and spasms have all been connected to exposure to mercury.  There are concerns with the neurological development within the fetus if exposed to mercury and many of the health advisories target women of childbearing age who are pregnant or considering it.  They have included the very young and the very old in their recommendations that these members of the population do not eat more than 6 ounces of fish (or shellfish) that have high mercury contamination.

The organic forms of mercury, dimethylmercury and methylmercury, are the more toxic forms.  These are introduced to the environment both naturally and from human activity.  Once in the aquatic environment they are absorbed by the phytoplankton (microscopic plants in aquatic environments).  Methylmercury accumulates in lipids (fats) within the cell at relatively low concentrations (phytoplankton are not large).  However, they are not passed by the creature.  The slightly larger zooplankton (microscopic animals) feed on the phytoplankton and accumulate the mercury they have stored.  Feeding on a lot of these, they accumulate even more mercury.  The zooplankton are consumed by small fish, who eat a lot and accumulate even more mercury.  Then the mid-sized fish consume them, and the larger fish consume those, and on and on.  The top predators have accumulated enough methylmercury to be hazardous to human health IF they are consumed by people.  This process of increasing the concentration of mercury through the food chain is known as biomagnification – “magnifying the problem”. 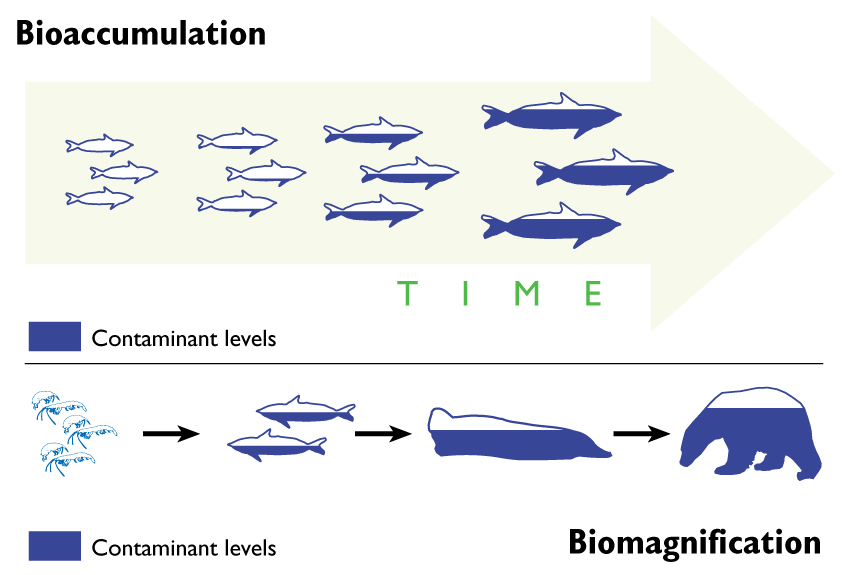 So, which fish are of concern?

Based on the Florida Department of Health for freshwater systems in Escambia County.

The following marine species are of concern….

In each case it is not recommended eating more than two servings a week.  For a few, it is recommended that the most vulnerable people mentioned earlier not at ANY… Those would include Blackfin tuna, Cobia, King mackerel, Bonito, and Shark.

It is recommended that NO ONE eat king mackerel over 31 inches and any shark species over 43 inches in length.

I guess as you look at this list, you see fish species that you like.  This list can lead folks to think… “I am just not going to eat seafood”.  This would be a mistake.  The Department of Health has found there are essential vitamins and nutrients provided be seafood that are missing if you do not eat them.  They found additional problems in fetal development when seafood protein was left out of the mothers’ diet.  So, the response would be… eat other seafood species you do not see on this list… or, if you see something you do like, no more than 1-2 6-ounce servings per week.

So, is there anything we can do about the mercury issue in our bay system?

The larger sources would be anthropogenic, which account for 67% of the known mercury in the environment, focusing on these can make a large impact.  Coming in at No.1 – producing electricity by burning coal.  This accounts for 65% of the anthropogenic sources.  Moving away from burning coal would make a huge difference.  But that is easier said than done.  Mining and burning coal are important for the economy of many communities.  It is one of the cheaper methods of producing much needed electricity.  But in addition to producing mercury compounds during the heating process, many other toxic compounds are produced and released as well – not to mention the amount of greenhouse gases produced during this process.  Hence the name “dirty coal”.  There are other methods of producing electricity and the solution would be to convert not only the power plants to these methods, but the coal dependent communities to this line of work.  This one step would make a big difference. 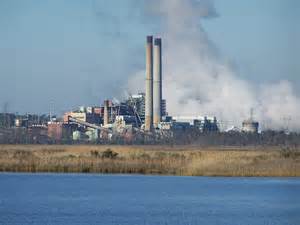 At a much smaller scale, mining for gold produces 11% of the mercury from the mine tailings, cement production (7%), and incinerating garbage (3%).  Though not a large player in this game, reducing the amount of solid waste burned each year would help reduce the mercury issue.

The takeaway here is that the number of imperiled waterways in the Pensacola Bay System have been reduced over recent years and we will look at this in another article.  But for those that remain, mercury is the prime reason.  It is also important to understand that mercury is a naturally occurring element and can not be broken down, so we have what we have – but, we can stop adding to the problem.  Third, eating some seafood each week is good for you.  You will just need to select species that are not problems or watch how much you eat if you prefer some of the listed species.

For more information on the 2021 imperiled waterways list visit

For more on the seafood safety species lists visit

Other sources for this article included: