Wildlife on the Beach in May

It is mid-spring and time of nesting for much of the wildlife in the area.  It is also noticeably warmer than our previous hikes.  Due to my work schedule, and the surveys for other nesting activity, I did this hike earlier in the month and later in the day, than I typically would have.  I began my hike at 1:00pm – near the hottest part of the day, and not the best time to see wildlife, but I definitely wanted to get a hike in this month and so this is when I could. 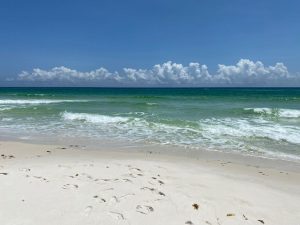 The Gulf was relatively calm on this early afternoon in spring.

It was warm.  On this day it was 83°F and there was a light breeze from the southeast.  On the previous hikes I needed my fleece.  Though I had it in my backpack, I did not need it today.  My hike was at Big Sabine and as usual, I began on the Gulf of Mexico.  The first thing I noticed when I crossed over the boardwalk was the number of people.  I usually hike in the early morning or late afternoon and see few humans.  But at mid-day the beach was full of people, and I probably looked strange walking among them with my long pants, long sleeved shirt, and boots.  The second thing I noticed was mats of Sargassum on the beach.

Sargassum is a floating brown algae we see in the warmer months in our part of the Gulf.  It is first an algae, not a true plant.  Algae lack roots, stems, and leaves.  They produce no cones, fruit nor flowers with seeds.  They are nonvascular, meaning they lack a system of vein-like tubes that move water around the plant.  Plants usually do have these tubes.  They are not called arteries and veins as they are in animals, but rather xylem and phloem.  Because algae lack this circulation system, they live emersed in the water.  Since they lack true roots they anchor to hard substrate, like rocks and coral, using a suction type apparatus called a holdfast.  The flexible, herbaceous stipe, analogous to the stem, flows in the current extending their blades (analogous to leaves) into the light.  Like plants, algae require water, carbon dioxide, and sunlight to photosynthesize their food.  Because of this they need to live in relatively shallow water, and they need a rocky bottom to attach their holdfast to.  We have little hard bottom and therefore less of the classic algae you read about in other parts of the world. 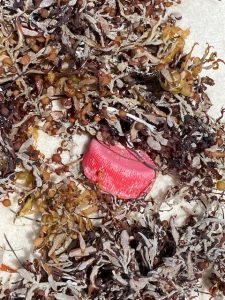 Notice the small air bladders on this Sargassum weed. These are used by the algae to remain near the sunlit waters of the open Gulf.

Sargassum has a different plan to deal with this problem.  They float.  When you look at this seaweed on the beach you will notice they have numerous small circular air bladders called pneumatophores.  These air bladders allow Sargassum to float in the sunlit waters of the Gulf and not worry about how, or where, they would attach their holdfast.

Large mats of Sargassum can be found floating out in the open Gulf and these mats provide a fantastic habitat for many small and large marine creatures.  There are sargassum crabs, sargassum shrimp, and even a sargassum sea horse.  There is a small filefish and a frogfish known as the sargassum fish.  It is the target for baby sea turtles that successfully made it from the beach, through the surf, and into the open Gulf without being consumed.  Here they will live and feed for many months at which time they are large enough to venture back out.  Larger fish often seek out these mats searching for food, and fishermen seek the mats knowing that larger fish are probably in the area.

These mats of Sargassum get caught in the large ocean currents and find their way to the middle of the Atlantic.  Here the ocean is calm, like the eye of a hurricane, and huge mats of Sargassum can be found piled up.  Christopher Columbus found this massive expanse of Sargassum while crossing the Atlantic.  Because it was calm here, and the Sargassum so thick, his ships became becalmed and he noted in his log to avoid this place, which was then called the “Sargasso Sea”.

On today’s hike there was quite a bit of this seaweed washed ashore.  Most of the marine life living in the seaweed sense the waves and the impending beaching, and jettison for mats further offshore.  So, you usually do not find many creatures in the seaweed washed ashore, but sometimes you do.  You can take a small dip net out deeper and grab some still floating and you may have better luck.  Today, I explored what was washed ashore and did not find much.  I did find a lot of plastic, and those who study Sargassum ecology will tell there is a lot of plastic debris caught up in the Sargassum mats.  Today I noticed a lot of bottle caps.  Not many bottles, but lots of bottle caps.  As many others do, we encourage everyone to dispose of the garbage properly.  I read this week of a manatee found near Mobile Bay earlier this year who died of cold stress but had swallowed a plastic bag, which was caught in his throat.  Marine debris kills.  Please dispose of your trash properly. 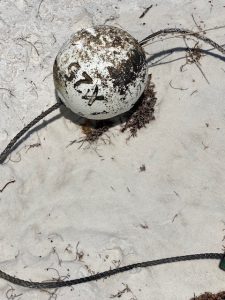 This crab pot float was one of several debris items washed in with the sargassum.

Heading inland to the dune field I heard sirens.  The beach patrol was answering a call.  I am not sure where, nor what the issue was, but these again are sounds I do not usually hear when hiking early and late in the day.  There are currents in the Gulf that can suck you out to sea, and each year we have visitors drown not knowing where these currents are, or how to get out of them if they are caught in one.  Pay attention to the colored flags and be careful.  I never saw, nor heard, an ambulance follow the beach patrol.  So, I am guessing everyone was okay on this call.

The dune field on this May afternoon was warm.  There was a light breeze from the southeast that kept things from getting too warm, but it was warm none the less.  As we move closer the hot days of summer the wildlife will move more at dawn and dusk, as well as in the evening.  I was not expecting to see a lot on this hike. 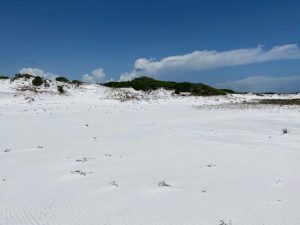 This flat area of the dune field was quite warm on this afternoon and made me think of crossing a desert. 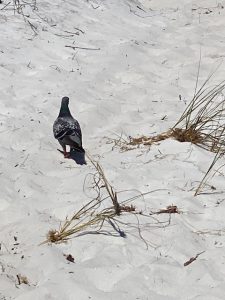 This was an unusual site, a pigeon walking in the open dune field.

As always you can see what has been moving by searching for tracks and tracks, I did find.  Many of them were human, indicating the tourist season is upon us, but there were tracks of animals as well.  There were plenty from our friends the raccoon and armadillo.  I did notice more raccoon tracks this month.  I and my volunteers who survey nesting beaches notice more raccoon tracks this time of year looking for eggs.  I also noticed more snake tracks on this hike, they too are mating and moving much more.  The lizard tracks were fresh, and I have noticed these moving during the warmer parts of the day and their tracks running across the dune face told me they were very busy that day. 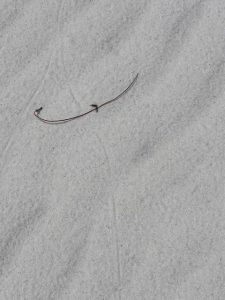 This straight line the sign of a tail drag by a lizard, most likely the six-lined skink. 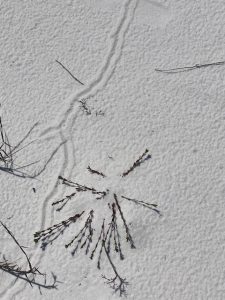 Many who visit the dunes of our barriers find these burrow looking trails. These are made by beetles. 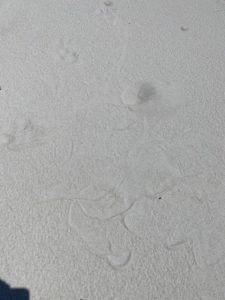 I followed this snake track until I found this – what appears to be a “tussle” the snake had with a possible prey.

Being spring you would expect flowers, and there were some, just not as many as you might expect.  Most of them were white and were blooming on plants near the boggy areas of the swales.  The conradina that blooms more in the winter, was done and the blossoms were gone.  I did see the early stages of the magnolia flowers trying to come up, but the bright green shoots of new growth on the pines were not visible.  There were bees, lots of bees. 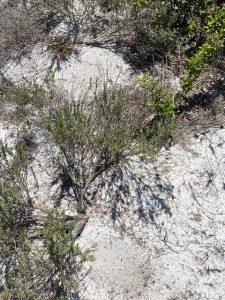 The lavender blossoms of the false rosemary, which appeared in winter, are now gone. 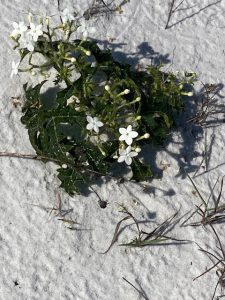 White flowers were common on this spring afternoon. Such as this one on the spiny bull nettle. 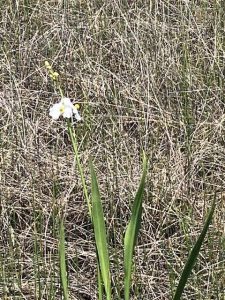 Another white flower is seen on this Sagittaria growing in one of the swales between dunes.

I hiked through a small pine scrub area thinking I might someone in the shade avoiding the heat of the day but did not find anything.  I went along the edge of the tertiary dunes where they meet the maritime forest looking for the same thing.  Nothing, but there were tracks.  The cactus seemed to be more abundant this month. 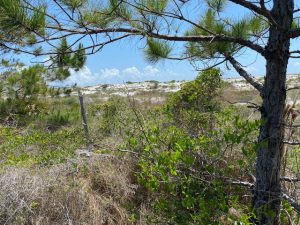 The pine scrub offered one of the few places with shade. 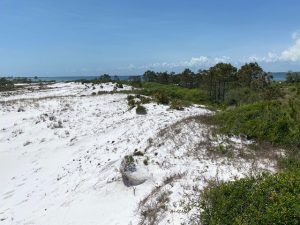 The dune field of a Florida panhandle barrier island. 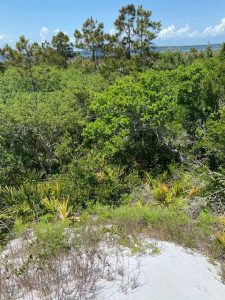 From atop of one of the higher dunes you can see the steep drop towards the marsh.

Along the ridge between the maritime forest and the salt marsh is where I found the otter slide last month.  I did not see any evidence of otters today.  The bird action was slower today as well.  Maybe because of the heat they too had settled somewhere.  I did not see an osprey, which is unusual. 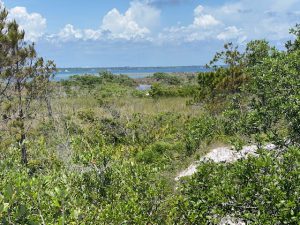 Big Sabine as seen from atop one of the larger dunes.

As I reached the beach of the Sound, I did notice a LOT of digging by armadillos.  They had been very active.  There were no snakes or marsh rats.  There were again people, these were on jet skis.  There were a few fishing from small boats.  With no rain over the last week or so the visibility in the Sound was amazing, but I only saw one small blue crab.  No hermit crabs and not any fish.  However, the lagoon of the marsh the killifish, also known as bull minnows, were abundant and the males all aglow with their iridescent blue colors of breeding season.  The males were chasing each other all over the tidal pools and open water of the lagoon designating their territories for current breeding that would follow.  I did notice more crows than I usually do and what made me catch their attention was the constant calling at me and the hovering over me suggesting they too were breeding, and an active nest was nearby. 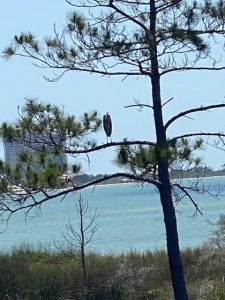 A blue heron is seen sitting in a pine overlooking Santa Rosa Sound. 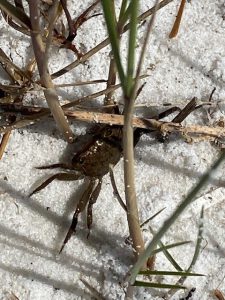 A small Seserma crab is seen hiding under grass along the beach of the Sound. 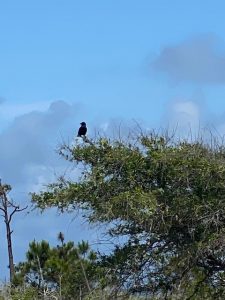 The crows were numerous and active on this spring afternoon.

I was not expecting much hiking in the middle of the afternoon, but it is always good to do these just to see what is moving.  I hope to do another hike this month either early in the morning or late in the afternoon.  Maybe we will see more. 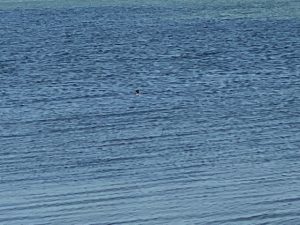 It may be hard to see, but there was a small duck enjoying the Sound. 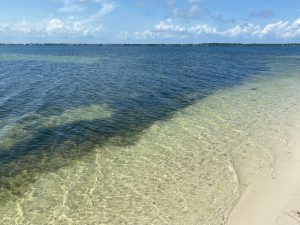 With little rain over the last few days the water clarity was excellent and you could see the seagrass very well.