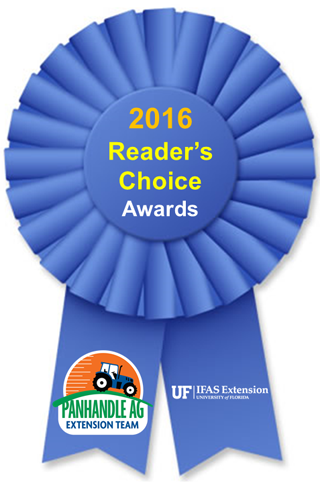 The Panhandle Ag e-news project began in April of 2012.  Over the past five years,  1,131 articles have been published that are searchable by topic area, keyword, author, or by using the search engine box provided on the site.  The Panhandle Agriculture Extension Team is made up of 40 county agents and specialists serving commercial agriculture in Northwest Florida.  This faculty team contributed articles on a weekly basis to provide educational information to farmers and ranchers in the region related to farm management, pest management, best management practice recommendations, as well as announcements for upcoming educational events.  The electronic newsletter is made up of four parts:  a WordPress website that allows numerous authors to add content, weekly notifications via email using the Subscription Management System (SMS), as well as Facebook and Twitter accounts which provide direct links to newly published articles for subscribers.

2016 was an even more successful year for Panhandle Ag e-News.  18 county agents and 18 state specialists contributed 304 articles in 2016, that were posted to the website, with links shared through Facebook and twitter accounts. 46 issues of the electronic newsletter were emailed to 3,775 subscribers.  The newsletters, along with Facebook and twitter posts generated 167,881 page views (459/day) in 2016.  This represented a 26% increase in subscribers from the previous year, and a 52% increase in readership as compared to 2015. In 2016, the Facebook followers grew 240% from 318 to 1,084, and the number of twitter followers grew 30% from 350 to 456 at the end of the year.

There were quite a number of the articles that were very popular, but there were some articles that really stood out as favorites.  The following are the 30 most read articles, and the 10 most popular jokes published in 2016:

The 2016 Reader’s Choice Award goes to an article written by Matt Hersom, UF/IFAS Beef Extension Specialist.  Matt’s article that discussed the difference in weight of round bales of varying dimension and the numbers of bales need to feed 25 cows per week.  His article was a smash hit on social media, because it was relevant to both hay producers and hay buyers, and was read 10,169 times in 2016.

What Happened to Your Pasture?

The runner up this year was an article written by Mark Mauldin, Washington County Ag Agent.  Mark’s article discussed issues that cause pastures to decline to the point they need to be renovated.  His article was read 1,409 times because he tackled such an intriguing topic.

Enhancing the Market Value of Your Next Calf Crop

The third most read article was written by Kalyn Waters, Holmes County Extension Director.  Kalyn captured some great advice to share from Ed Neel, Dothan Livestock Market on basic techniques to get more value from calves sold through a livestock market.  Her article was read 974 times.

The fourth most popular article was written by Doug Mayo, Jackson County Extension Director.  Doug’s article shared the disturbing reports of screw worms that are infesting the native deer population in the Florida Keys.  This article was read 949 times.

The other most read articles, listed in order of popularity, are:

These articles were ranked based on the number of times readers opened the link to each page in 2016.  The editors and authors would love to hear your feedback on the articles that were most helpful to you.  Use the comment box below to share what articles, or types of articles you got the most benefit from this past year.