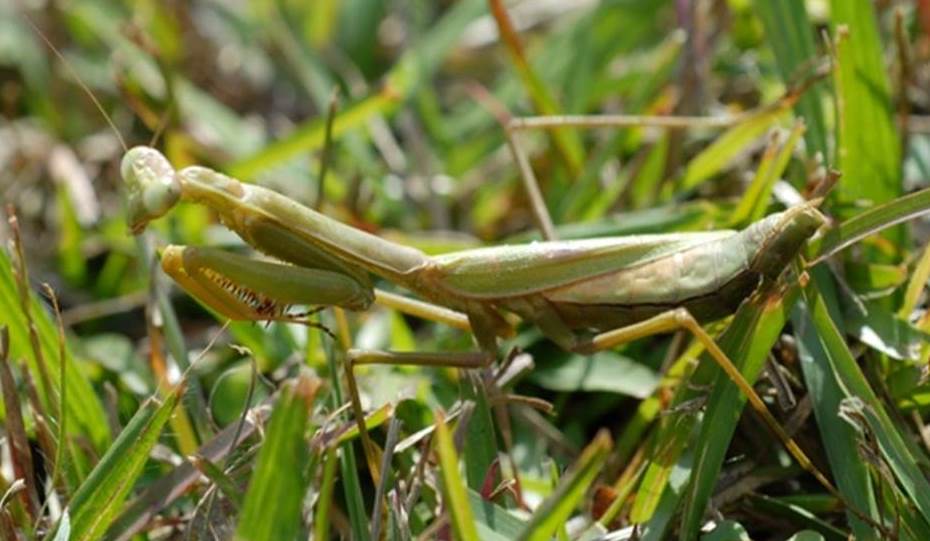 Summertime is bug time in the Florid Panhandle.  The weather has provided enough rain for the bugs which depend on a supply of foliage and the temperatures have been ideal for a population explosion.

Stink bugs, leaf-footed bugs, grasshoppers, all sizes and colors of caterpillars and many more have been enjoying the lush and plentiful dining options.  More than one Panhandle homeowner or gardener has been plagued by the sudden appearance of a hoard of hungry nuisances which are eyeing the menu choices at residences.

Fortunately, nature has a way of eventually balancing all situations when left to its own devices. With the increase of the plant eaters comes a surge in those insects which restrain the excess population.

One of the most easily recognized predator insects is the praying mantis.  This beneficial insect is actually a family with multiple members, some of which have been introduced to Florida.

While there are over 2400 mantis members worldwide, Florida is home to eleven. Two of those exotics have been introduced from other regions, but considered non- invasive.

Mantises are thought to have evolved during the Cretaceous period about 100 million years ago, possibly from a predatory cockroach with similar front legs. Their closest surviving insect relatives are cockroaches and termites, both of which they will consume if given the opportunity.

Like many insects, the mantis is equipped with a tough, durable exoskeleton which provides a basis for successful close quarter combat and meal procurement. These hunters have three other advantages which create a severe vulnerability in their prey’s defense and potential for surviving a mantis encounter.

The mantis is an ambush predator which will lay in wait for the victim/meal to deliver itself.  The mantis has the instinctive ability to identify and hide in areas with high amounts of prey species traffic.

This insect is a master at stealth and camouflage. The creature’s coloration and linear shape allow it to blend into the earth tones of many settings.

To complement its ability to conceal itself in plain sight, the mantis can hold perfectly still and patiently wait for the oblivious bug to bumble into sticking range.  At that precise moment, the mantis is a blur of lethal motion.

The mantis’ forelimbs are a set of deadly spiked vices used to immobilize and secure its target.  It extends these spiny levers forward in a raised position which appears as though it is in a mealtime prayer, hence its name.

The kill technique is to impale and restrain the victim with a single stroke of the forelimbs while holding the victim securely to the mantis’ body.  On occasion the attempt fails and the mantis has to apply a more direct approach.

This insect’s beak is designed for slicing and tearing its victim’s body. Its jaw muscles provide the power to effectively employ this tool.

Depending on its stage of live, the mantis will eat a wide variety of creatures.  Early stage mantises will eat little flies and other tiny insect (including its siblings), but at maturity they will take on small reptiles and amphibians along with a variety of destructive insects.

Female mantises will even consume their prospective mates. Despite its vicious and cannibalistic nature, the praying mantis is the answer to many gardeners’ prayers.