Bay Laurel: An Attractive Culinary Addition for Your Landscape

Laurus nobilis, commonly known as bay laurel, is an aromatic tree native to the western Mediterranean and it yields the bay leaves used in cooking. Mature leaves are leathery and dark green. Most are 3 to 4 inches in length with minute margin serrations. Small, inconspicuous yellowish-white blooms may appear in summer followed by a tiny fruit which turns black as it dries. Bay laurel is salt tolerant and can be grown on barrier islands. 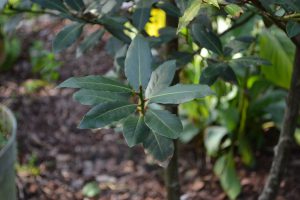 The bay laurel tree is called daphne in Greece. Greek mythology says that Apollo, the sun god, fell in love with the nymph Daphne. Her father took action and turned her into a laurel tree. To remember Daphne, Apollo wore a laurel wreath and the tree came to represent honor and glory. Greek and Roman heroes and scholars were crowned with laurel wreaths. The earliest Olympic champions in 776 BC wore garlands of fragrant bay leaves. The tree was considered good luck, but the death of a bay tree was considered an omen of things to come.

Bay laurels are slow-growing and show variation in growth habits. Most have a dense and shrubby appearance with multiple shoots from the base while some have a single trunk. Under ideal conditions, planted in the ground, the bay tree can reach 25 feet or higher, but most commonly grow to about 6 feet. In our zone, 8B, bay laurels can grow in the ground if planted in a sunny southern or eastern exposure location near a wall or building for cold protection.

Bay laurel plants like well-drained, rich soil. If the bed is properly prepared, additional fertilizer is rarely needed. Bay laurels will survive light frosts and the infrequent hard freeze if it is not for a prolonged period. More mature trees can also freeze to the ground and come back from the rootstock. Young trees should be protected from cold stress for several years until they are at least a foot tall before planting in the ground. 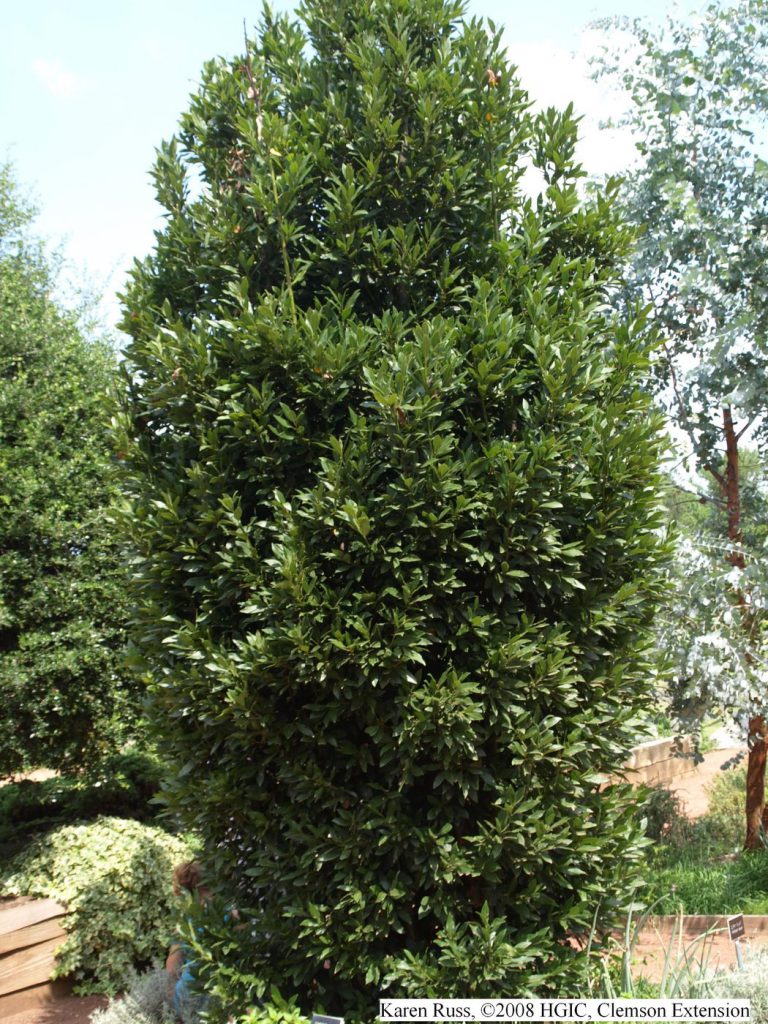 Bay laurels can also be grown indoors in containers in areas with strong natural lighting. Clay or wooden containers with many drainage holes are preferred. Plants should be fertilized regularly with complete fertilizer. In the summer, time-release fertilizer works best due to frequent watering. However, fertilizers too high in nitrogen will produce lush foliage with little flavor.

Bay laurel is a favored container-grown street plant in Europe. It has historically been found in gardens as a tree, a hedge, a topiary, or a focal point in an herb garden. Bay trees are only now gaining popularity in the United States. It was awarded the herb of the year in 2009.

Bay laurel has a reputation of being frustrating and difficult to propagate which results in very high prices for starter plants. To propagate use semi-hard wood cuttings and snap from branches rather than clipping. Strip the lower leaves and dip cutting in a rooting hormone. Stick in small pots filled with a fine-textured medium. If a knob forms at the end in a few weeks, then roots may form within a few weeks to several months. In recent years, plants have been more readily available in nurseries and even at large box stores.

Bay laurel is one of the primary culinary herbs in the garden. The culinary history has been documented for thousands of years. The leaves are treasured and used in many cuisines. Fresh leaves are tough but dried leaves are hard and brittle. Leaves are added at the beginning of cooking. Both fresh or dried are usually removed after cooking before food is served to prevent the risk of choking. Much is said about fresh versus dried bay leaves. I usually use fresh leaves because I have them available. I think they have a wonderful flavor. I use equal amounts of fresh or dried. Soft fresh leaves (petioles and midribs removed) are great chopped in salad dressings. Chopped leaves are also good in butters and cheeses with other herbs. Cajun cuisines use bay leaves to flavor rice and seafood. Bay is a primary element of bouquet garni, a bouquet of herbs, used in French cuisine. Bay goes in meats, soups, stews, vegetables, pasta, potatoes, and sometimes in custards and dessert sauces. Like parsley and marjoram, bay laurel is called a “liaison” herb which helps contrasting herb flavors blend rather than fight each other.

There are many plants that look like and smell like the bay laurel. Red bay, Persea borbonia, is native throughout our region and a substitute for bay laurel. Red bay is best used fresh. Its fragrance and flavor dissipate quickly if dried. This is one of the only substitutes. Others are poisonous or have little to no flavor. Madalene Hill and Gwen Barclay, authors of Southern Herb Growing, wrote, “A word to the wise: Be wary of collecting and using any wild plant as flavoring or food unless you’re absolutely sure of its safety. Just because a plant is called some type of bay or laurel does not mean it is edible.” Some are highly poisonous.

If you enjoy good food, you have enjoyed bay laurel, Laurus nobilis, whether you knew it or not. It’s time to grow your own beautiful and fragrant bay laurel tree. This will be a wonderful addition to your garden and to your kitchen. 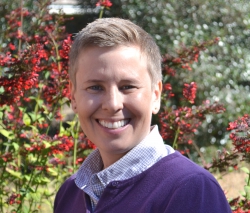