This is one of the most beloved animals on the planet… sea turtles.  Discussions and debates over all sorts of local issues occur but when sea turtles enter the discussion, most agree – “we like sea turtles”, “we have nothing against sea turtles”.  There are nonprofit groups, professional hospitals, and special rescue centers, devoted to helping them.  I think everyone would agree, seeing one swimming near the shore, or nesting, is one of the most exciting things they will ever see.  For folks visiting our beaches, seeing the white sand and emerald green waters is amazing, but it takes their visit to a whole other level if they encounter a sea turtle. 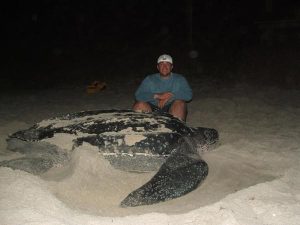 The largest of the sea turtles, the leatherback.
Photo: Dr. Andrew Colman

There are five species of marine turtles in the Gulf represented by two families.  The largest of them all is the giant leatherbacks (Dermochelys coriacea).  This beast can reach 1000 pounds and have a carapace length of six feet.  Their shell resembles a leatherjacket and does not have scales.  Because of their large size, they can tolerate colder temperatures than other marine turtles and found all over the globe.  They feed almost exclusively on jellyfish and often entangled in open ocean longlines.  There is a problem distinguishing clear plastic bags from jellyfish and many are found dead on beaches after ingesting them.  Like all sea turtles, they approach land during the summer evenings to lay their eggs above the high tide line.  The eggs incubate within the nest for 65-75 days and sex determination is based on the temperature of the incubating eggs; warmer eggs producing females.  Also, like other marine turtles, the hatchlings can be disoriented by artificial lighting or become trapped in human debris, or unnatural holes, on the beach.  These animals are known to nest in Florida and they are currently listed as federally endangered and are completely protected. 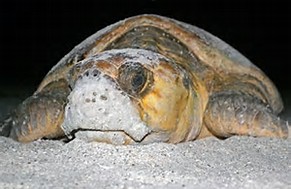 The other four species are found in the Family Chelonidae and have the characteristic scaled carapace.  Much smaller than the leatherback, these are still big animals.  The most common are the loggerhead sea turtles (Caretta caretta).  As the name suggest, the head of this sea turtle is quite large.  Their carapace can reach lengths of four feet and they can weigh up to 450 pounds.  The head usually has four scutes between the eyes and three scutes along the bridge connecting the carapace to the plastron.  This animal prefers to feed on a variety of invertebrates from clams, to crabs, to even horseshoe crabs.  It too is an evening nester and the young have similar problems as the leatherback hatchlings.  The tracks of the nesting turtle can be identified by the alternating pattern made by the flippers.  One flipper first, then the next.  The loggerhead is currently listed as a federally threatened species. 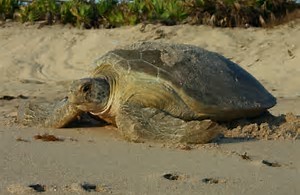 The green sea turtle (Chelonia mydas) is called so not for the color of its shell, but for the color of its internal body fat.  They are fans of eating seagrasses, particularly “turtle grass” and other plants, which produce the green coloration of the fat.  The fat is used to produce a world favorite, “turtle soup”, and has been a problem for the conservation of this species in some parts of the world.  At one time, most green turtles nested in south Florida, but each year the number nesting in the north has increased.  They can be distinguished from the loggerhead in that (1) their head is not as big, (2) there are only two scales between the eyes, and (3) their flipper pattern in sand is not alternating; green turtles throw both flippers forward at the same time.  Green turtles are listed as federally threatened. 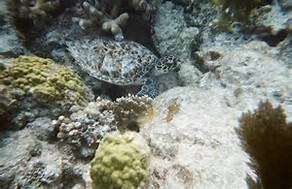 A hawksbill sea turtle resting on a coral reef in the Florida Keys.
Photo: Molly O’Connor

The hawksbill turtle (Eretmochelys imbricata) is more tropical in distribution.  They are a bit smaller, with a carapace length of three feet and a weight of 187 pounds, but their diet of sponges is another reason you do not find them often in the northern Gulf of Mexico.  To feed on these, they have a “hawks-bill” designed to rip the sponges from their anchorages.  Their shell is gorgeous and prized in the jewelry trade.  “Tortoise-shell” glasses and earrings are very popular.

The most endangered of them all is the small Kemp’s Ridley sea turtle (Lepidochelys kempii).  This little guy has a carapace length of a little over two feet and weighs in at no more than 100 pounds.  These guys are commonly seen in the Big Bend area of Florida but for years no one knew where they nested.  That was until 1947 when an engineer from Mexico found them nesting in large numbers (up to 40,000) at one time, in broad daylight in Rancho Nuevo, Mexico.  This was problematic for the turtle because the locals would wait for the nesting to be complete before they would take the females and the eggs.  Protected today they now face the problem that their migratory path across the Gulf takes them through Texas and Louisiana shrimping grounds, and through the 2010 Deep Water Horizon oil spill field.  Not to mention that illegal poaching still occurs.  Though all species of sea turtles have had problem with shrimp trawls, the Kemps had a particular problem, which led to the develop of the now required Turtle Excluder Device (T.E.D.S) found on shrimp trawls in the U.S. today.  Sea turtles have strong site fidelity for nesting and in the 1980s many Kemp’s Ridley eggs were re-located to beaches in Texas in hopes to move the nesting to other locations.  The program had some success and they have been reported to nest in Florida.  Their diet consists primarily of crabs but there have been reports of them removing bait from fishing lines fishing from piers over the Gulf.  This is species is federally endangered and is considered by many to be the most endangered sea turtle species on the planet. 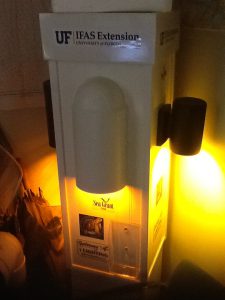 Sea turtles face numerous human-caused problems including (1) artificial lighting that disorient hatchlings and cause mortality to 50% (or more) of the hatchlings, (2) items left on beaches (such as chairs, tents, etc.) that can impede adults and entrap hatchlings, (3) large holes dug on beaches in which hatchlings fall and cannot get out, (4) marine debris (such as plastics) which they confuse with prey and swallow, (5) boat strikes, sea turtles must surface to breath and can become easy targets, and (6) discarded fishing gear, in which they can become entangled and drown.  These are simple things we can correct and protect these amazing Florida turtles.