In December of 2021 the Florida Fish and Wildlife Conservation Commission (FWC) passed new regulations concerning the diamondback terrapin.  One will make it illegal to possess a terrapin without a permit beginning March 1, 2022.  The other will impact recreational crab trap design in early 2023.  A number of people have begun to ask questions ab 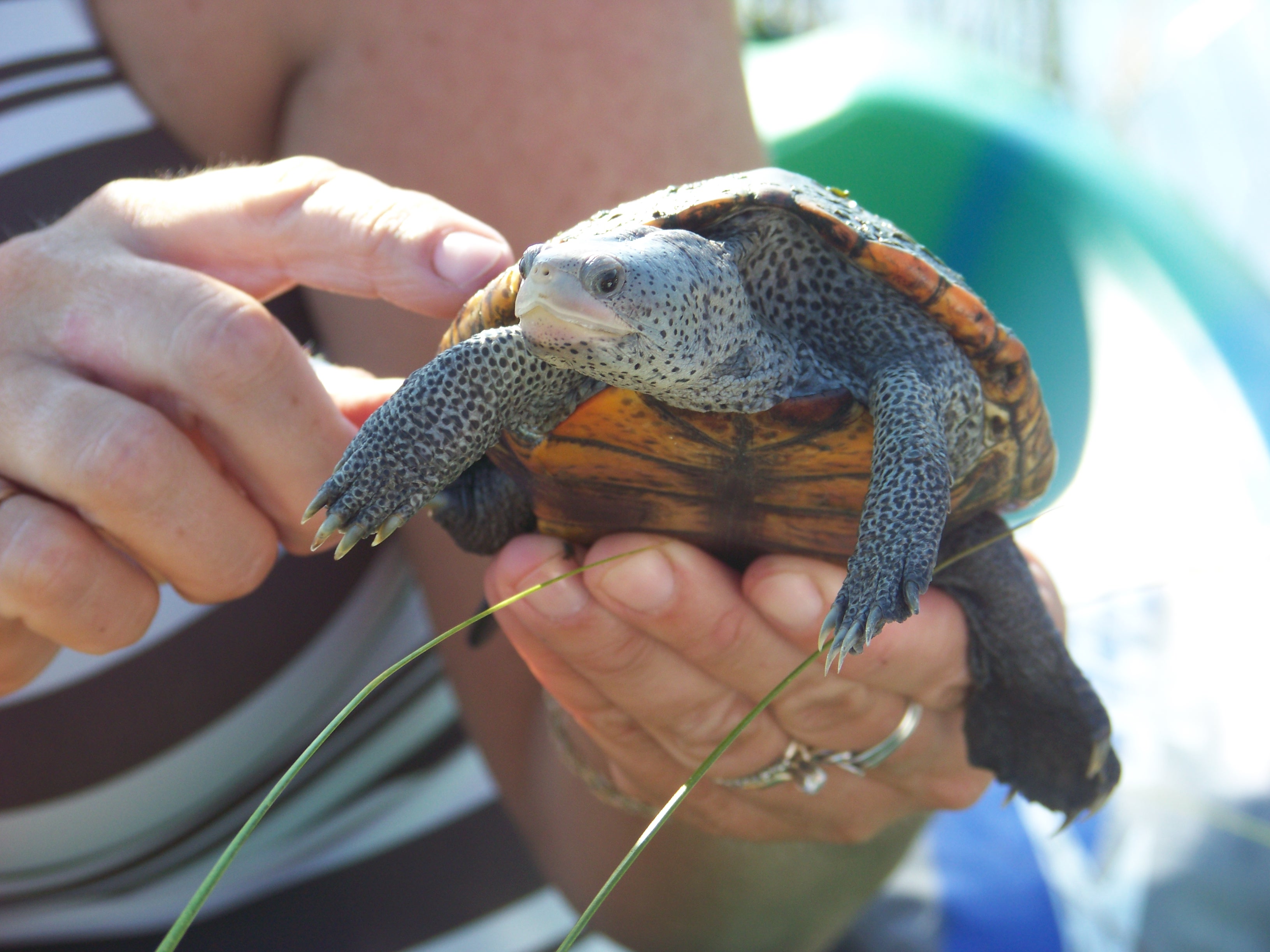 The diamond in the marsh. The diamondback terrapin.
Photo: Molly O’Connor

ut this new ruling so, we will explain it.

WHAT IS A DIAMONDBACK TERRAPIN?

We will start there.  Most Floridians have never heard of this animal, and if they have, they know it from the Chesapeake Bay area.  Diamondback terrapins are turtles in the Family Emydidae.  This family includes many of the pond turtles Floridians are familiar with – cooters, sliders, red-belly, and others.  The big difference between terrapins and pond turtles is the coloration of their skin, and their preference for brackish water – they like estuaries over ponds and lakes.  They do have lachrymal glands in their eyes to help excrete salt from water, but they are not as efficient as those of sea turtles so, they cannot live in sea water for more than about a month – it is the bays and bayous they like to call home.

There are seven recognized subspecies which range from Cape Cod MA., to Brownsville TX.  Five of them are found in Florida and three are only found in Florida.  But few Floridians have ever heard of them and even fewer have seen one.  Their cousins the pond turtles are quite common.  We see their heads in ponds and lakes, several of them basking on logs near shore of ponds, lakes, and rivers, and frequently see dead ones along our highways.  We don’t see terrapins.  We do not see their heads in the marsh, basking on logs, or dead carcasses along our coastal highways.  Again, this is an unknown turtle to us.

WHY ARE THERE NEW REGULATIONS ON A TURTLE MANY HAVE NEVER SEEN?

The question sort of explains the answer – we do not see them – their population in our state may deem some action by the FWC.  In the Chesapeake region they are quite common, and people see them frequently.  It is the mascot of the University of Maryland.  Along the roads to the barrier islands in Georgia hundreds of terrapins can be found trying to nest and many are hit by cars.  In most of these mid-Atlantic states there is some form of protection for them.  They either list them as threatened or a species of concern.  One state has it listed as endangered.  Again, these are states where encounters are much more common.

Florida has a rich diversity of turtles, maybe the richest in the country, and we have been the target for turtle harvest.  Turtles are sought after for food and as pets.  The harvest of some species has been heavy and FWC has listed them as “no take”.  For a variety of reasons, harvest being one of them, Alligator Snapping Turtles (Macrochelys temminckii), the Suwannee Cooter (Pseudemys suwanniensis), and the Barbour’s Map Turtle (Graptemys barbouri) are illegal to possess without a permit.  This includes their eggs.  Because other species look very similar to these, they have also been added to the no-take list.  This would include all species of cooters and snapping turtles, the Escambia Map Turtle (Graptemys ernsti) and the Striped Mud Turtle (Kinosternon baurii) – which is a small riverine turtle that resembles a small snapping turtle.  Note: the regulation on the striped mud turtle is for the lower Florida Keys only.  You could take diamondback terrapins but only one and you could have no more than two in your possession.  You could not possess their eggs.  But with the 2021 ruling – this has changed.

As mentioned, terrapin encounters are rare in our state.  There has been concern about their population status here.  I got involved with them in 2005 primarily to answer the question “Do terrapins even exist in the Florida panhandle?”.  The answer is yes, they do.  Since 2005 myself, and trained volunteers, have conducted 859 surveys searching for them between Escambia and Franklin counties.  We have encountered terrapins, or terrapin sign (tracks, shells, depredated nests) 215 of those – 25% of the surveys; most of those encounters were terrapin sign – they are hard creatures to find.  Because of the low encounter rate across the state, it is believed that the populations here are low and in need for conservation measures.

Then comes the crab traps…

Researchers with the Diamondback Terrapin Working Group have identified several stressors to terrapin populations.  Loss of habitat, depredated nests by predators (particularly the raccoon), road mortality, and… crab traps.  Terrapins feed primarily on shellfish but will eat other things if given the opportunity.  They do have a tendency to enter crab traps.  Though they feed on small juvenile crabs it is the bait we think they are after in this scenario.  Once in, like blue crabs, they find it hard to escape.  Unlike blue crabs, turtles have lungs, and the terrapins eventually drown.  In the Chesapeake Bay region blue crabs are ”king” – a major commercial and recreational fishery.  Terrapins entering crab traps means crabs are not.  There have been as many as 40 dead terrapins found in one trap.  This was a major concern for all.  Dr. Roger Woods of the Wetlands Institute in New Jersey began working on a device that would keep terrapins out but allow blue crabs in.  Data shows that in most cases, the larger females are the ones entering and the smaller males would follow.  If you could keep the female out it was believed that most males would not enter.  So, the device was designed to keep the large females out.  A 6×2” rectangle seemed to work best.  Field studies showed that these By-Catch Reduction Devices (BRDs) kept 80-90% of the terrapins out and did not significantly impact the crab catch.  We had a design that seemed to work. 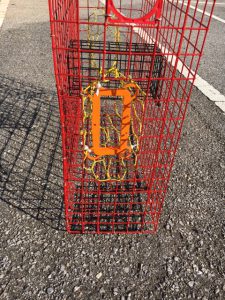 This orange plastic rectangle is a Bycatch Reduction Device (BRD) used to keep terrapins out of crab traps – but not crabs.
Photo: Rick O’Connor

BRDs are designed to keep terrapins out but allow crabs to enter.
Photo: Virginia Sea Grant

These BRDs have been required in the Mid-Atlantic states for a few years now.  With the concern in Florida populations, it is now coming to Florida.  By March 1, 2023, all recreational crab traps in Florida will be required to have a fixed funnel size no larger than 6×2”.  Either the funnel must be this size, or you can attach one of the plastic orange BRDs to the opening (see photo).  Currently bait and tackle shops do not have the BRDs but will be acquiring over the next year.  FWC will be working on providing sources between now and March of 2023.  If you are in the Pensacola area you can contact me, I have a case of them in my office.

As far as having one on your possession – it is now a no-take species.  This rule began March 1, 2022.  If you have had a terrapin in your possession you can apply for a no-cost permit to keep it (visit the FWC link below to obtain information on applying for this permit).  If you are an education facility that houses terrapins for educational purposes – the same, you can apply for a no-cost education permit to keep your terrapins.  You must have this permit by May 31, 2022.

If you have any questions concerning this ruling or how to comply with it, you can contact FWC or your county Sea Grant Extension Agent.  The FWC link for more information on this, and other turtle regulations, can be found at https://myfwc.com/wildlifehabitats/wildlife/freshwater-turtles/?redirect=freshwaterturtles&utm_content=&utm_medium=email&utm_name=&utm_source=govdelivery&utm_term=campaign.