Wildlife on the Beach in April

It is now spring, and wildlife is beginning to stir more.  However, on this April day another cold front had just past the area and the morning temperature was 59°F.  To add to this, there was a strong west wind that made it feel colder.  Despite the fact it was an early spring morning in Florida, I had my fleece on and was dubious that I would see any reptiles.

This month’s hike was out at Big Sabine near Park East.  The Gulf of Mexico was churning like a washing machine due to the passing front and the beach had a sharp scarp to it.  There were a few plovers out trying to probe the sand for food, but not much else.  Usually after hard winds you will find an assortment of things washed up on the beach but there was little really, possibly removed by the storm.  There were however signs of digging by humans.  It is now sea turtle nesting season, and we remind folks that these large holes can be a real problem for the mothers trying to nest.  Please fill them in before you leave the beach. 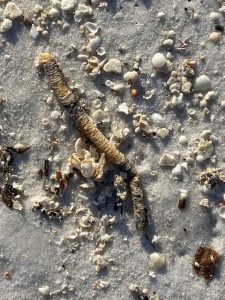 Diopatra are segmented worms similar to earthworms who build tubes to live in. These tubes are often found washed up on the beach. 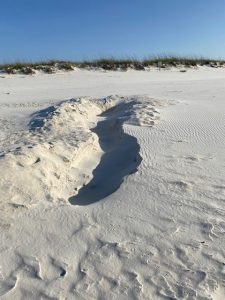 Large holes like this can be problematic for many island wildlife species – like nesting sea turtles. Please fill them in when you leave for the day. 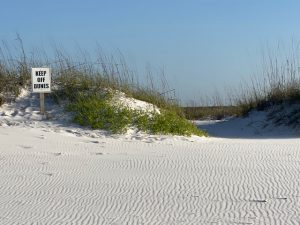 “Blow outs” are formed by people walking over the dunes. They will increase the erosion of these dunes and enhance flooding during storms. Please cross over on boardwalks. 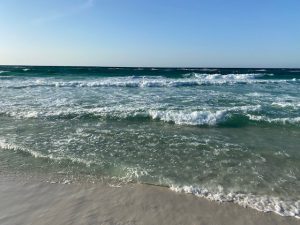 The Gulf of Mexico was churned up due to the passing cold front. 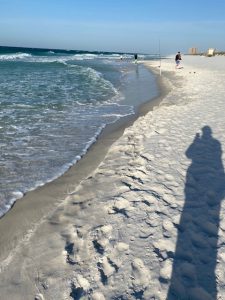 Beach scarps are formed during heavy surf changing the dynamics of the beach for creatures living there. 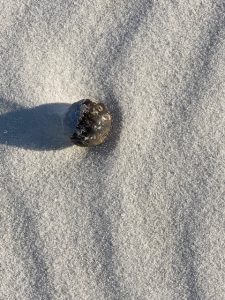 “Sea Beans” are seeds of tropical plants that wash ashore this time of year. Most do not germinate and those that do are usually on a high energy beach and do not survive.

As you head north into the dune fields the wind typically slows, but this morning it was blowing plenty hard, and I was getting “sand blasted” at some points.  Not the best day to find wildlife.  The sun was out and I decided to check the leeward side of shrubs and bushes, but had no luck.

One thing I did find was the sandhill milkweed in bloom.  This plant is host to the monarch butterfly caterpillars and produces a mildly toxic “milk” which the caterpillars accumulate making them toxic to birds.  This toxin is carried on to the adult butterfly stage and many birds learn to avoid butterflies with the monarch coloration because of the bad taste.  Though I saw lots of milkweed, it was too windy for the butterflies.

The blooms of the false rosemary, which appear in late winter, had all fallen but it was obvious that the pine trees had release their pollen.  Most of the scrubby pines in the dunes had new growth on them.

There were several ephemeral ponds scattered amongst the dunes.  All had water in them from the recent rains and I was hoping to maybe find a basking snake or singing frog.  No luck on either.  There were damp areas where water had recently been, and the carnivorous sundews and spore producing club moss, known as ground pines, were doing very well. 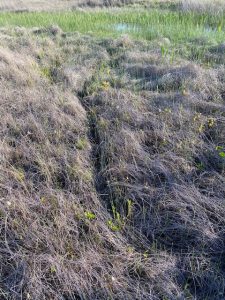 The path used by wildlife to reach the ponds of the dune field. 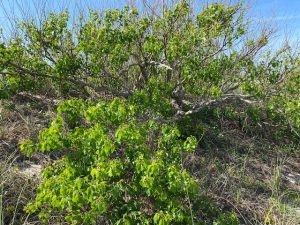 Two invasive Chinese tallow trees were found growing in the dune field. These will be removed. 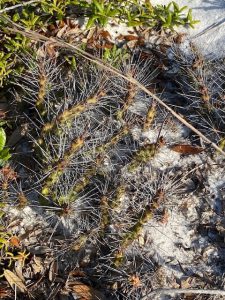 Devil’s Joint is a common cactus in the dunes. Wear shoes when exploring! 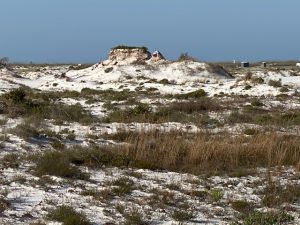 The high winds of the beach can form some interesting dunes. This one resembles the mesa’s of the American southwest. 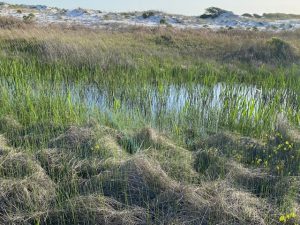 There are numerous freshwater ponds in the low areas of the dune field. Many of them are ephemeral. 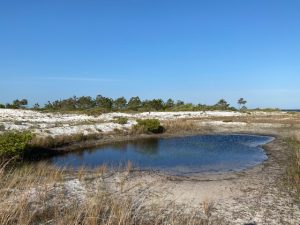 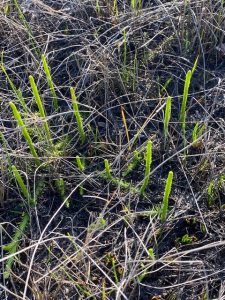 Ground pine is a type of club moss found in the wet-damp areas of the dunes. 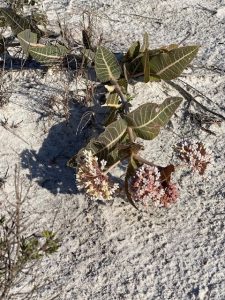 The sandhill milkweed is bloom this time of year. 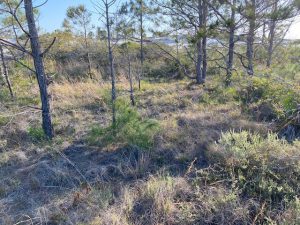 Pine scrub areas like this are found in the dune fields and are great places to find snakes and lizards. 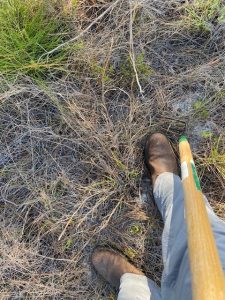 Since some of our snakes are venomous, it is recommended you wear good boots and have a hiking stick to move logs and high grass before stepping in or over. 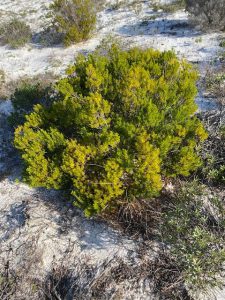 Seaside rosemary produces a wonderful smell that reminds many of the beach.

As I moved from the dunes into the maritime forest, I was expecting to see birds.  I did, but not many.  Most were small woodland birds I could not identify, and there was an osprey flying over briefly, but for the most part the bird action was slow today – again, probably due to the high winds.  I was again hoping to maybe find a basking snake on the sunny leeward side of a bush or fallen tree but had none.  I did find a common parasitic plant that was becoming more common this time of year.  It is called “love-vine” or dodder.  This yellow-colored string looking vine lacks chlorophyll and wraps around host plants to remove much needed nutrients.  It begins to appear this time of year and is not restricted to the beaches.  I have seen it 10 miles inland.

One thing that was very evident in the maritime forest was sign of armadillos.  Their tracks and digs were found everywhere.  I did locate a few burrows and found even more along the beach of the Sound.  These animals are very abundant on this island I am curious as to what predators they have and how their populations are controlled.  They can be found day or night and dig frequently looking for grubs and other invertebrates to eat.  Whether they seek out turtle or bird eggs I do not know.  More on this guy next month.

I will add that I did see tracks of raccoons who do eat turtle eggs and also what I think was a “slide” of an otter.  The number of otter encounters has increased in recent years.  Individuals have been seen not only on the beach but around Bayou Texar and Project Greenshores.  These are very elusive animals and produce a high pitched “chirp” or “bark” when approached.  I have seen them near Ft. Pickens on a couple of occasions in the ponds.  There are the old hatchery ponds at Big Sabine, and it was there that I found the “slide”.  These slides are used by the otters to slide into the water.  I have seen video of them exiting the water, sliding back in, only to repeat this as if they were playing like kids – and I think that is what they are doing… playing.  Otters are the largest members of the weasel family, mustelids, and pretty cool. 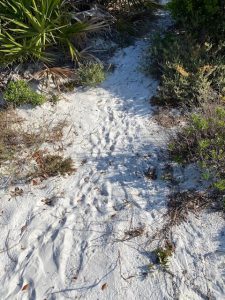 Many creatures use the same trails we do. This is a good place to look for tracks. 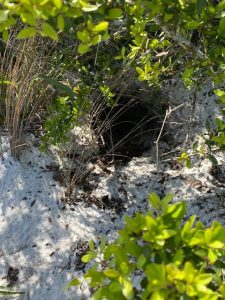 Armadillos are all over the island. This is a burrow of one. 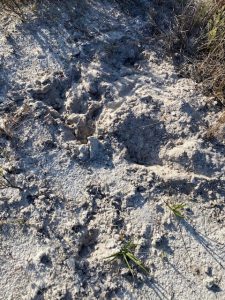 The digging of armadillos can be found everywhere as well. 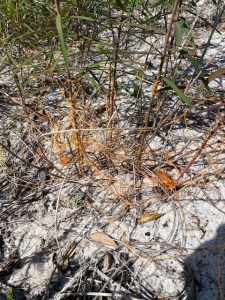 Dodder (or “love vine”) is a parasitic plant that begins to appear this time of year. 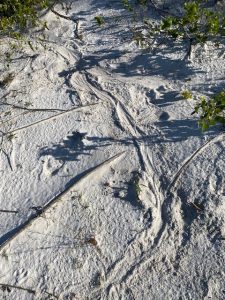 This is what I think to be an otter slide. Though I could not find tracks to confirm, I have seen them build and use these before. 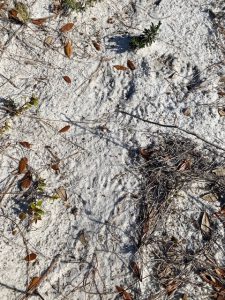 Raccoons are common all over the island.

The marsh of Big Sabine was pretty quiet on this windy day.  I did see two Canadian geese walking along the shore.  I recently saw several nesting on an island in Okaloosa County and was told they were now year-round residents.  I am not sure whether these were residents to Big Sabine or not, I had not seen them before, but will note this as this series continues this year. 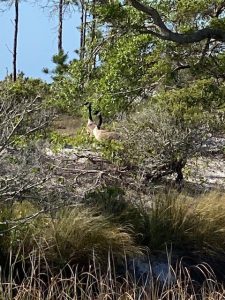 Canadian geese are becoming residents on some islands along the panhandle. 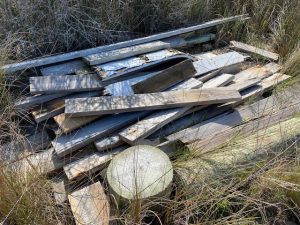 Wood piles like these can be good habitat for some beach wildlife.

The beach of Santa Rosa Sound was quiet as well.  Again, I probed around to seeking a basking snake, a nesting terrapin, or maybe a nesting horseshoe crab (it was a spring tide day) but found nothing.  There are piles of wood gathered by locals cleaning the beach and these actually make good habitat for some wildlife.  I poked around in them but did not find anyone today.  This was also where I found most of the armadillo burrows.  Why they preferred this over the forested areas I am not sure.  There may be many more in the forest that I just did not see.  The spring tide was rising and much of the beach was exposed but I saw no fiddler crabs or other creatures and there was nothing swimming nearshore in the grass beds.  Again, the lower temperatures and high winds I am sure had everyone in a warmer calmer place.

Despite little wildlife today it was a great walk and despite the high winds, the weather was actually nice.  It is spring and nesting should be going on across the island.  We will visit Ft. Pickens in May and see what is going on then. 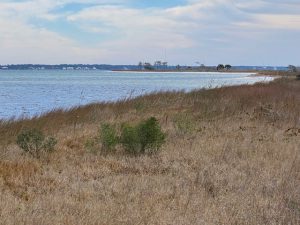