Bring the Color of Hawaii to the Panhandle with Ti Plant!

Too often, would be gardeners travel to exotic locales, become intoxicated with the beautiful floral display of Plumeria, Jatropha, Bird of Paradise and Bougainvillea, and come home with visions of homemade leis picked from the garden dancing in their heads.  As anyone who has attempted to grow any of the aforementioned plants in the Panhandle will tell you though, fulfilling those visions in the landscape are easier said than done!  However, not all is lost for the gardener wanting to bring the tropics home.  A tropical feel in the landscape can be achieved, you just have to look beyond the aforementioned flowering plants that will have long since succumbed to winter frost by the time they mature and begin flowering and instead to tropical foliage plants that can be enjoyed for a season and easily (cheaply too!) replaced the following spring.  Of all the tropical foliage options available for Panhandle landscapes, my favorite is the Ti Plant, sometimes called Hawaiian Ti. 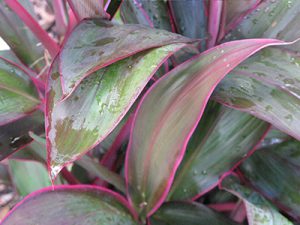 Even if you have never heard of Ti, you have probably seen it.  The strap like, 12-18” long, purple and pink striped leaves are hard to miss and add an unmistakable tropical flair in the landscape!  Ti Plants grow generally in single, unbranched stalks, though most commercial growers combine several plants into a single pot to give a bushy, multi trunked appearance that looks more appealing on a retail nursery bench.  These plants will easily reach 4-6’ in height in a single warm season, providing a powerful punch of pink/purple all summer long.  In addition to its considerable attractiveness, Ti boasts a cosmopolitan constitution, as it will grow in sun or shade, outside or inside.  Of course, some cultural do’s apply to Ti broadly, regardless of where it is grown, as well as a few don’ts.

In general, Ti will be more colorful in brighter light.  Though it grows well in shade, its leaves tend to lose their luster and fade to a dull purple in full shade.  Similarly, though it will survive in full, all day sun, Ti’s foliage tends to bleach a bit in these conditions and can turn a whitish gray.  It is best to shoot for somewhere in the middle for the most vivid foliage color.  If growing indoors, give Ti as much light as you can.  If growing outdoors, full sun through midafternoon is appropriate, as is bright shade throughout the day.  Be sure to give Ti plants consistent moisture, as they will readily wilt down under prolonged drought conditions.   As with watering, Ti prefers a consistently fertile soil and will appreciate a topdressing of a complete, slow release fertilizer (made by Osmocote, Harrell’s and others) at planting, with a follow up application 60-90 days later (possibly more frequently depending on temperature and frequency of watering). 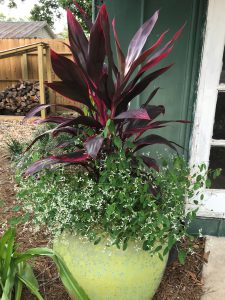 Though Ti performs well planted in the ground in Northwest Florida as an annual specimen to brighten a border (think of it like a supersized Coleus), it really gets to shine in large, mixed containers.  Ti’s upright growth habit and traffic stopping color make it the perfect thriller in the widely used “thriller, filler, spiller” container design.  Because Ti can grow quite large relative to other common container plants, a large 20-45 gallon container is necessary to facilitate optimum root growth and plant development.  If a smaller container is chosen, water management will become an issue as the Ti plant’s root mass will quickly crowd the container.  I prefer glazed ceramic or concrete containers as these are often painted in bright colors that complement Ti’s foliage, do not allow as much air exchange as terra cotta planters (soil in terra cotta containers dry very quickly in hot, dry weather), and are heavy enough that tall Ti plants won’t cause them to blow over in windy conditions.  Mix smaller, mounding filler plants and trailing spiller plants under and around Ti in containers.  For a striking contrast in color, choose companion plants in white, yellow, orange or chartreuse (remember, plants don’t have to flower to be colorful, vivid foliage plants like coleus or caladium work too!).

Regardless of how you use Ti Plant, you’ll find it to be one of the most high value color plants in the landscape.  Plant one today and happy gardening!