Rhizomatous begonias are a large group of Begonia species, hybrids and selections characterized by large, sometimes-colorful leaves arising from thick rhizomes that grow along the soil surface. White or pink flower clusters that appear in late winter and spring are an extra bonus with these plants. Some types can be used in north Florida as herbaceous perennials that add bold leaf texture and color as well as flowers to shady gardens. 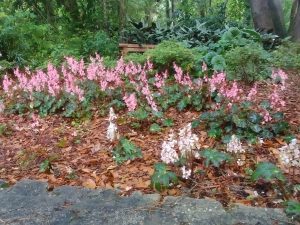 Common rhizomatous begonias such as Begonia nelumbiifolia, ‘Erythrophylla’ (“Beefsteak”), and ‘Ricinifolia’ have long been grown outdoors in south and central Florida gardens as herbaceous perennials. North of these areas, rhizomatous begonias were considered cold sensitive and thus used strictly as pot-grown plants grown indoors or protected over winter. Nonetheless, north Florida trials testing the performance of outdoor, in-ground plantings started in Tallahassee and Gainesville as long ago as the late 1980s and early 1990s. With the proven success of some rhizomatous begonias in north Florida, interest in these plants increased rapidly in the early 2000s. Since then, savvy north Florida gardeners have been delighted by the possibility of using rhizomatous begonias as interesting herbaceous perennials for the shade garden. While temperatures below freezing can damage or kill leaves, these plants will usually produce new leaves from the rhizomes once warmer temperatures return in spring.

Leaves of rhizomatous begonias are this plant’s most distinctive feature and are why this group is so appealing to gardeners. Leaves often are large, from a few inches wide to almost 3 ft. in diameter (as reported for the cultivar ‘Freddie’ under the right conditions). Leaf shape may be rounded, star-shaped or irregularly edged, and leaf colors include burgundy, red, bronze, chartreuse, silver, and various shades of green including one so dark as to be almost black. Many types have leaves displaying patterns of one or more colors and some have silver or red markings. Undersides of leaves are often burgundy-colored, and leaf stems (petioles) also may exhibit colors other than or in addition to green. Leaves may be smooth, textured, or fuzzy-appearing due to large numbers of sometimes conspicuous hairs. Some types have leaves with an interesting three-dimensional spiral located on top of the leaf where the leaf blade attaches to the stem. 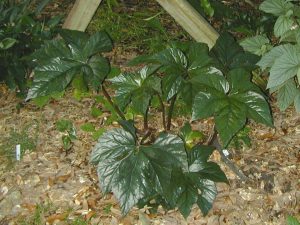 Rhizomatous begonia rhizomes are thickened, fleshy stems 1 to 2 in. or more in diameter that grow, branch and spread horizontally at or just below the soil surface, often in the mulch or leaf duff. Adventitious roots develop along the rhizome, and dormant buds embedded in the horizontal stem can be stimulated to grow new leaves after damage, stress or when divided. With age, as rhizomes grow outward, the oldest part of the rhizome will stop producing leaves and eventually die.

The rhizomes contain water and food reserves that allow this type of begonia to survive environmental stresses like drought as well as leaf loss or damage from cold temperatures. Shoots and roots can grow from the rhizome even if leaves and roots are killed or damaged.

Flowers occur in late winter to spring, depending on the species, cultivar and weather, and are quite showy on some selections. Flowers typically are white to various shades of pink and occur in a cluster (technically called a cyme) held above the foliage, in some cases dramatically high above the foliage. Individual flowers may range in size from 3/8-inch to over 2 inches at their widest point and a flower cluster may contain a few to over 120 individual flowers, depending on selection and growing conditions. A mature rhizomatous begonia may have an extended period of flowering, providing weeks of color. This long floral display results from large numbers of flowers developing sequentially on an individual flower cluster such that new flowers are still forming long after the first flowers have opened. Furthermore, multiple flower clusters appear over an extended time period. Flowers occasionally are pollinated and form winged seed capsules, though seed production and viability are variable. After flowering, the leaves remain a point of interest in the garden due to their size, lush appearance, interesting shapes and colorful patterns.

Cultural Requirements, Use and Maintenance

Rhizomatous begonias grow best in light shade or indirect light but can tolerate morning sun. Plants thrive in rich, organic, well-drained soil that is moist but not wet. A layer of organic mulch or leaf litter often is enough to provide basic conditions for growth in most soils if they are well-drained. Accordingly, organic mulches or leaf litter should be applied regularly around plants. Fertilizer stimulates growth but decomposing organic mulches can provide adequate nutrients, except perhaps with poor or sandy soils.

Newly planted begonias should be watered regularly. After establishment, most rhizomatous begonias benefit from regular watering but only require irrigation during periods of drought or extended dry weather.

An individual plant makes an attractive specimen plant in a container or in the garden. With time, a rhizomatous begonia can spread and, in the garden, develop into a patch. Alternatively, planting large numbers of the same rhizomatous begonia can create a very dramatic garden border, mass planting, or groundcover, especially in spring when all plants are flowering. To achieve this effect more rapidly and with smaller numbers of plants, tips of rhizomes can be pruned to stimulate rhizome branching and result in a denser plant or patch. Rhizome tip pruning should be done after plants finish flowering. Plants can be divided and moved easily since only the rhizome is needed to establish a new plant, but this should occur after flowering and early in the growing season so plants have long enough to establish before cold weather.

For aesthetic purposes, dead or damaged leaves may be removed as needed but especially after frosts and hard freezes. Similarly, leaves that overwinter often become “ratty” in appearance with time and may be removed without affecting plant growth.

Rhizomatous begonias have few pests or other problems. Mealy bugs can occasionally infest plants. As with other large-leaved plants, wind or physical contact can tear and damage leaves. In north Florida, winter frosts and freezes can damage and disfigure leaves or kill leaves entirely, causing them to lose structural integrity and collapse, appearing mushy. Foliage may be protected during cold weather by frost cloth, sheets or other typical cold protection strategies, though heavy coverings could themselves damage leaves.

Rhizomes themselves usually survive cold weather because they are insulated from low temperatures by being half-buried in the ground and/or being covered by mulch. Adding mulch regularly to rhizomatous begonia plants will provide increased freeze-protection. Also, their typical planting location under tree canopies protects plants from a radiation freeze. Soil drainage is a more important factor for rhizomes since wet soil conditions could lead to rot, particularly in winter.

Common Types and their Descriptions Under North Florida Conditions 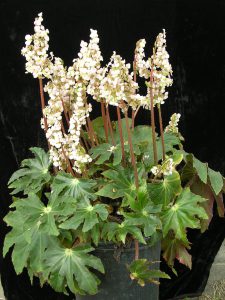 Technically rhizomatous begonias include Rex begonias, a group derived from Asian native, Begonia rex, and known for their especially colorful leaves. However, most Rex begonias do not grow well in Florida’s heat, high rainfall and high humidity, and so these begonias are excluded here.

Begonia heracleifolia: The species boasts star-shaped leaves up to 6 in. across on stiff, hairy, thick leaf stems (petioles) up to 5 in. long. Each of the pointed leaf lobes is edged in dark green and has a chartreuse stripe along the central midrib, adding contrast. Spectacular sprays of pale pink flowers appear in late winter in clusters measuring 3 ½ in. by 4 ½ in. on 6-in. flower stalks (pedicels). Each cluster contains about 30 or more flowers, each about 1 in. across. As the season goes on, foliage gets showier and showier. It often dies down after winter freezes but re-emerges in late spring. 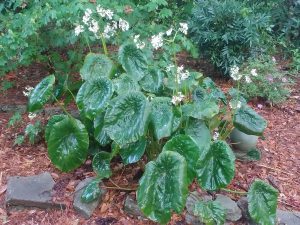 2. popenoei: Huge rounded leaves with red veins and undersides make this a specimen plant which can grow to 3 ½ ft. tall and wide. Hardy with protection, it throws up tall stalks with clusters of white flowers in late winter.

“Beefsteak”: This catch-all name refers to the original beefsteak begonia, ‘Erythrophylla’, as well as many derivatives that look similar. Beefsteak begonias characteristically have rounded leaves with a glossy green to bronze top surface and reddish undersides. Leaves range in size from 4 to 7 in. in diameter, and flower clusters are on stems up to 18 in. tall. ‘Erythrophylla’ was developed in 1847 and is considered a tough, vigorous plant, hence the common name, “beefsteak”. Given the long history and vigor, ‘Erythrophylla’ and derivative beefsteak begonias have long been shared as pass-along plants, world-wide as potted plants and later as an in-ground Florida garden plant. One type has ruddy, evergreen leaves and long-lasting, bold pink flower clusters. The scalloped 4-in leaves are on short 5 ½ in. reddish leaf stems but are most notable for remaining undamaged by temperatures down to the mid 20s °F, long after all other begonias’ leaves have turned to mush. Mid spring finds this plant topped by numerous clusters of dark pink flowers, with the display lasting 6 weeks or more. Individual clusters are about 8 in. by 5 in. on flower stems about 12 in. tall. Each cluster contains about 20 flowers each about ¾ in. wide at its widest point. 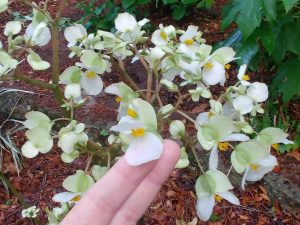 ‘Big Mac’: This is a large, vigorous plant with enormous star-shaped leaves having reddish undertones and red leaf stems. The plant grows about 3 ft. tall and 2 ft. wide. Individual leaves may grow up to 18 in. wide on 16-in. leaf stems but typical leaves on younger plants are 10 in. to 12 in. wide. Individual white flowers are an amazing 2 in. wide at their widest point in clusters measuring 7 in. by 12 in. and containing about 75 flowers. Cold winters will knock it to the ground, but this begonia re-emerges again in late spring. This plant was hybridized in 1982 by Paul P. Lowe in Lake Park, Florida.

‘Joe Hayden’: This begonia features dramatic, dark, lobed leaves with burgundy undersides. Leaves are up to 8 in. long supported by leaf stems up to 9 in. long. In spring, the plant is topped by light pink flowers held high above the foliage. Each cluster measures about 5 in. by 7 in. on flower stems up to 26 in. tall. Each cluster contains more than 100 individual flowers, each about ¾ in. across at its widest point. This selection was hybridized in California in 1953 by Rudolf Ziesenhenne, but many similar selections have been made and are often confused with ‘Joe Hayden’. 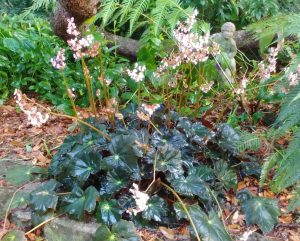 Many other cultivars are common, but other cold hardy types suitable for north Florida include ‘Caribbean King’, ‘Caribbean Queen’, ‘Washington State’ and the catch-all ‘Ricinifolia’ types (with large, castor bean-shaped leaves). New breeding by scientists and enthusiasts promises to deliver many more types of rhizomatous begonias with increased foliage cold hardiness and an expanded range of foliage types and colors. A major Texas nursery introduced a series of rhizomatous begonia hybrids marketed as Crown Jewel Begonia™. The series currently features five patent-pending cultivars that are promoted as landscape plants for Zone 8. Additional breeding work is ongoing in north Florida.

Rhizomatous begonias are easily propagated by division, separation of rhizomes, or by rhizome pieces. When planting, place the rhizome or pieces (as small as 2 in. long) horizontally and half buried in a new in-ground location or in a container with potting soil. As with other begonia species, leaves may be used for propagation, though this method usually takes longer to achieve a size suitable for planting in the garden. Plants can be grown from seeds but production time is similarly long.

Sharp, Peter G. (2011) Down to Earth – with begonias. 111 pp. http://ibegonias.filemakerstudio.com.au/PeterSharp/DownToEarthWithBegonias.pdf.

The International Database of the BEGONIACEAE. (2020) http://ibegonias.filemakerstudio.com.au/index.php?-link=Home. Accessed 16 April 2020. 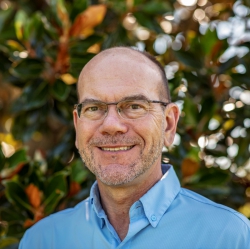 Gary Knox
Gary Knox is an Extension Specialist and Professor of Environmental Horticulture with the University of Florida at the North Florida Research and Education Center in Quincy. Dr. Knox’s research interests focus on evaluating species and cultivars of woody plants for their invasive potential as well as for ornamental characteristics. In addition to research plantings, Dr. Knox is working with a nonprofit volunteer group to develop "Gardens of the Big Bend," a series of botanical, teaching and evaluation gardens at the Center.