August is awful.  Its heat makes one miss the relative cool of July.  Its rain is so sporadic that it invokes nostalgia for the rainy afternoons of early summer.  But if there is a silver lining in August for gardeners, it is the simplicity that it brings.  The weaker spring crops, tomatoes, squash and the rest, are all gone now, destroyed or rendered fruitless by insects, disease, and heat.  This leaves only the hardened, usually pest and disease-free survivors Okra, Pepper, Sweet Potato and Eggplant.  I say usually because, this year, my eggplant bed is under attack by a new-to-me pest, the False Potato Beetle!

I’ve dealt with Colorado Potato Beetles (CPB) before.  Those orangish, black-striped terrors often attack my spring potato crops and occasionally bother early tomatoes.  However, I’ve never seen them in late summer on Eggplant.  This raised suspicion.  Also, I spotted unusual, round, whitish purple creatures munching on leaves from the same plants; these appeared to be the larval stage of the unidentified beetle. A little digging led me to identify these garden pests as the lesser known, lookalike cousin of CPB, the False Potato Beetle. 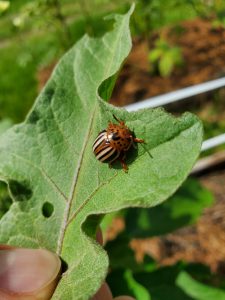 False Potato Beetle munching on an Eggplant leaf in the author’s garden.

False Potato Beetle (FPB) looks nearly identical to its cousin in the adult stage.  They are similarly shaped and colored, though a close look reveals subtle differences between species.  While both have yellowish-orange heads and pale-yellow backs with dark stripes, the FPB’s back is slightly lighter hued, more of a whitish, cream color.  Also, the CPB’s underside and legs are a very dark orange to brown, with the False Potato Beetle having lighter colored legs and underside.  If you’re saying, “These old eyes will never be able to tell the difference, County Agent.  Cream and light-yellow look the same to me.”, I get it.  Fortunately for those of us with poor vision, the larval stage (babies) of the two beetles looks very different and is the key to correct ID!  FPB larvae are larger and have a whitish coloration.  CPB larvae, in contrast, are a similar burnt orange color to the adult beetle.  I promise, the difference is very distinguishable!

False Potato Beetle is considered a minor garden and agronomic pest as they typically only bother Eggplant, and they don’t usually destroy entire plants.  However, if you get a FPB outbreak in your Eggplant garden, they can still be pretty destructive.  These beetles feed in the same manner as caterpillar pests, chewing away entire sections of leaves and stems.  Unchecked infestations can defoliate entire sections of plants.  So, if you find these little beetles eating away at your eggplant garden, what can you do? 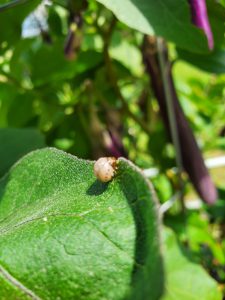 First, if you scout regularly, you’ll notice the beetles and their larvae in relatively small numbers before outbreaks become widespread.  I had pretty good success this year just catching infestations early and picking off the beetles I saw and squishing them.  Continue scouting and squishing for a few days and pretty soon,  the population is reduced to a manageable level.  However, if squishing makes you squeamish, you also have some common pesticide options at your disposal.  I normally encourage clients to start their chemical pest control strategy with “softer” products like Pyganic, a pyrethrin make from an extract from the Chrysanthemum plant.  Pyganic works great but is a little harder to find; you may have to order online or ask your local retailer if they can get it for you.  If you are unable to find Pyganic or it doesn’t perform for you, the old standby products with carbaryl or pyrethroids (Sevin, Ortho Bug-B-Gone, and others) also work well.

False Potato Beetle can be a late summer garden pain, but with regular scouting, proper insect ID, lots of squishing, and maybe a timely pesticide application or two, you should be able to continue to harvest eggplant deep into fall!  If you have FPB in your garden or have another horticultural question, give your local UF/IFAS County Extension office a call!  Happy Gardening!