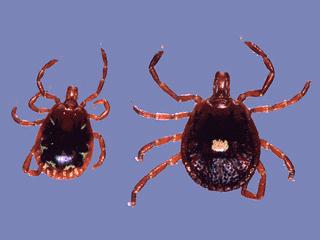 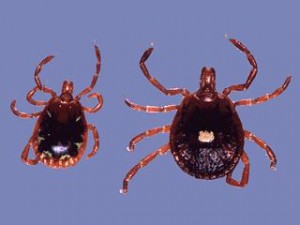 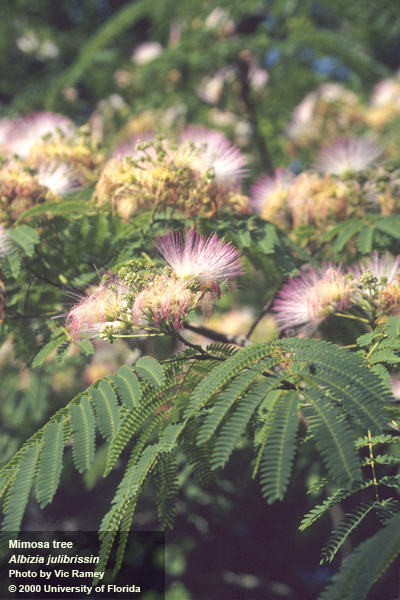 Mimosa Tree: When traveling down secluded roads, one always marvels at the beautiful fragrant puff-like flowers lining the right of way. Many people decide that they must have one for their yard. Unfortunately, obtaining one for landscaping purposes is a bad decision. This tree is a Mimosa, Albizia julibrissin, and is famous for the ability to thrive in disturbed areas and fix nitrogen. Mimosa was brought from China in the 1700 for use as an ornamental and remains popular today. Unfortunately it crowds out native vegetation by reducing sunlight and nutrients available and may clog small waterways with intense growth.  What’s more, it produces numerous seed that can remain viable for many years and is capable of vegetative propagation. Fortunately, Mimosa may be controlled by a variety of techniques. Eliminating existing trees mechanically, such as with a power saw, will reduce future numbers substantially. Additionally, the application of a 25% solution of glyphosate or triclopyr herbicide to a freshly cut stump will prevent re-sprouting of cut trees. When applying herbicides, apply them only to the stump and not to surrounding areas. Remember to make the application within one minute of cutting the tree. Enjoy your invasive removal!

Video courtesy of UF/IFAS Center for Aquatic and Invasive Plants 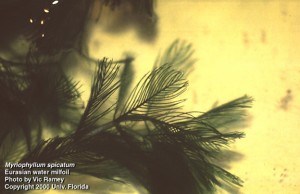 Photo Courtesy of Universtiy of Florida

Eurasian Water Milfoil: Eurasian water milfoil is a submerged aquatic plant that can be found in northwest Florida in lakes, rivers, and coastal marshes. Water milfoil forms a dense mat of vegetation that can block sunlight and habitat for native plants. These mats can increase water temperatures and interfere with boat traffic, fish habitat, and native aquatic plant species. Eurasian milfoil was first documented in Florida in 1964. It was reportedly planted by aquarium plant dealers. It is still used today in the aquarium industry and obtained through suppliers and through internet sales. This plant is listed as a category II on the Florida Exotic Species Pest Plant Council List, which means it has the potential to overtake native submerged plant communities. The spread of Eurasian milfoil can be caused by the breaking of stems and roots, which can be carried by boats, engines and trailers to other lakes and coastal marshes. To help prevent spread of Eurasian water milfoil to Florida’s waters, always clean off your boat, motor and trailer at the ramp to avoid transporting vegetative stems to other areas. In addition, never release or dispose of aquarium plants or animals into local waterways. 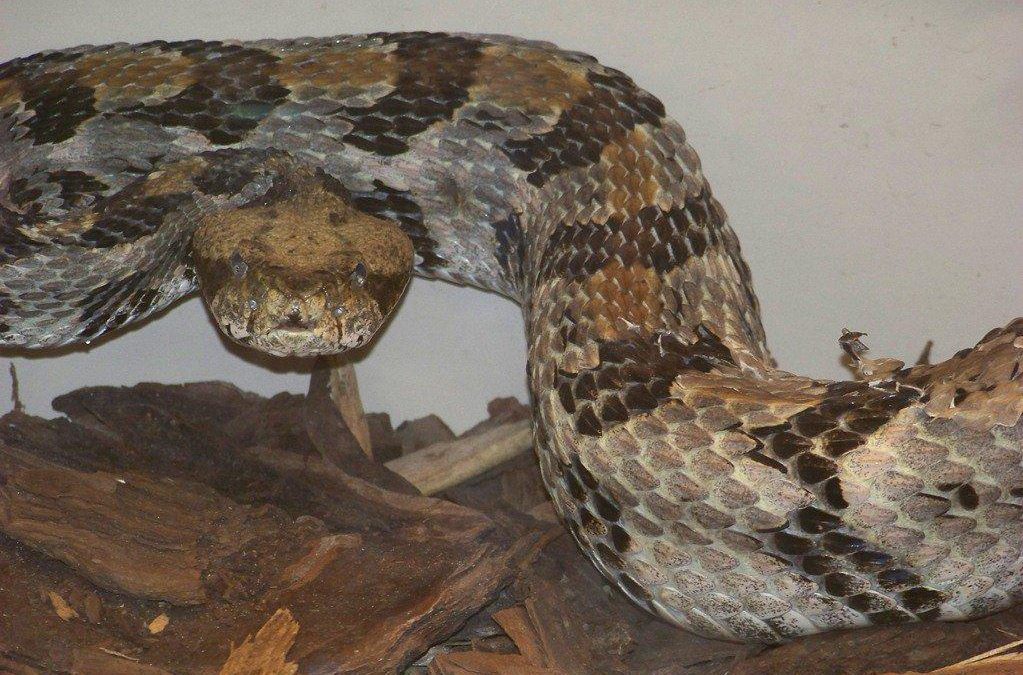 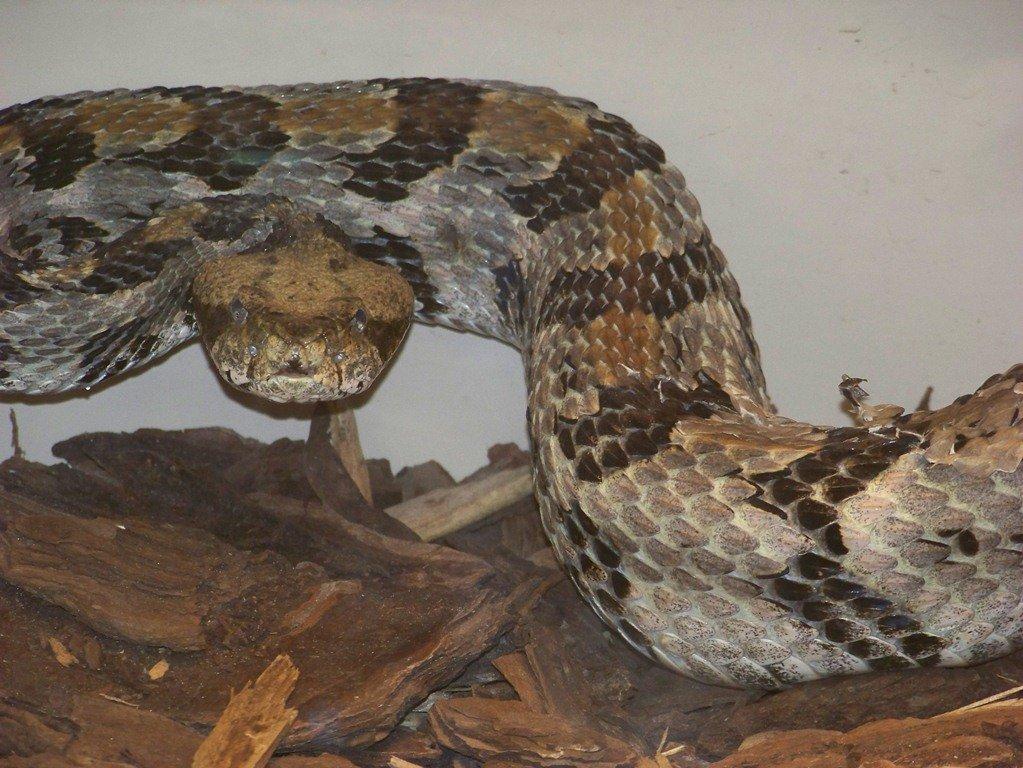 The Timber Rattler, also known as the Canebrake Rattlesnake can grow to over 6 feet. Commonly found in damp woodland environments. Photo Courtesy of Molly O’Connor

The Southeast Partners in Amphibian and Reptile Conservation has dubbed 2013 as the “Year of the Snake”.  There are many animals that strike fear in humans but little cause more than snakes.  Interestingly kids seem to like them. It is when we become an adult that we do not. Why is that?

Snakes are very cryptic and stealthy hunters preferring the mode of hide-ambush.  We encounter them along a trail only to be surprised and the “surprise” scares us to death!  Many people do not like surprises and never want to experience that feeling again; so snakes become enemies.

The ole saying “the only good snake is a dead snake” is very true to many people. Many of us have encountered snakes and a few may have been bitten. Studies suggest that 95% of humans bitten by snakes are either trying to catch it, or kill it.  So the lesson is clear… if you do not want to get bit, leave it alone.

Snakes in fact do very good things for us.  They are one of the best “rodenticides” you will find. It is actually better to find a snake in your barn than a rat.  Like spiders and bats, which consume thousands of unwanted insects, snakes should be appreciated for what they do for us and left to do it. 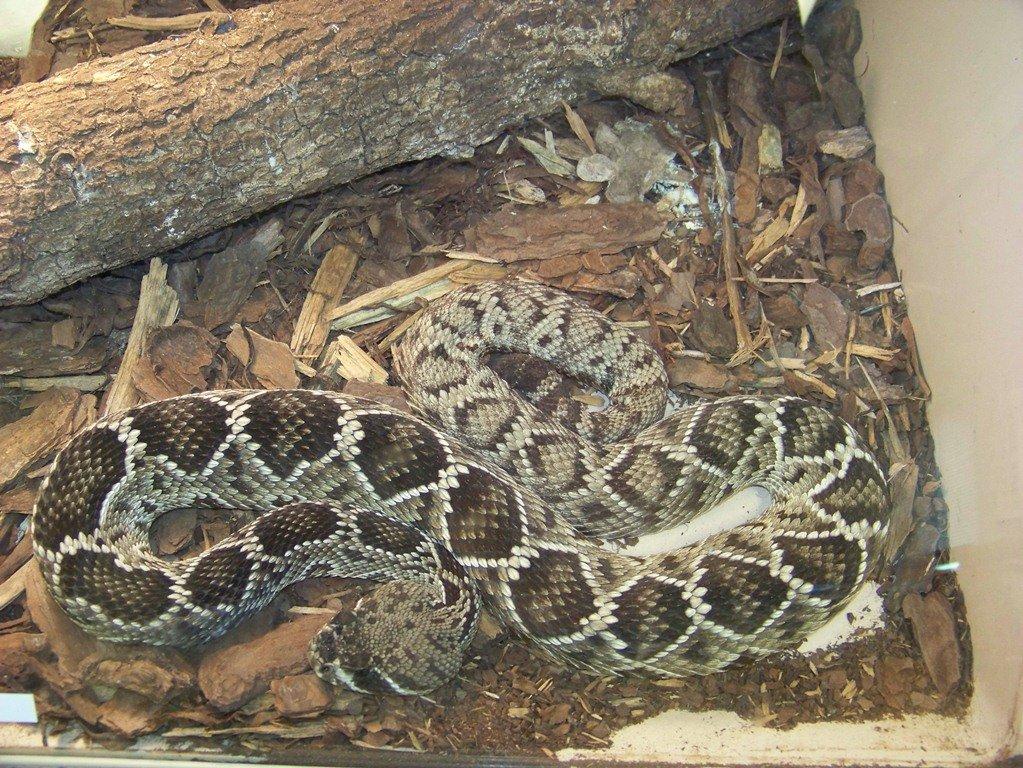 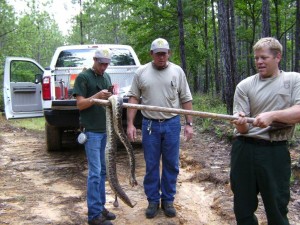 A large snake like this almost invites the adventurous to chase and pick it up. This is not recommended since 95% of snake bites occur while trying to pick-up or kill a snake. Better to leave in place and give space. Photo courtesy of Alan Dennis.

Ray Ashton lists 66 species and subspecies of snakes in the state of Florida.  Only 6 of these are venomous.  60 (91%) of Florida snakes belong to the Family Colubridae.  All colubrid snakes in Florida are non-venomous.  They can be distinguished from the others by their round pupils, narrow heads, and solid (non-hollow) teeth. There are five species of Florida snakes in the Family Viperidae.  The “pit-vipers” have hollow hinged fangs through which they can inject venom.  They possess elliptical pupils and have a “pit” between the eye and nostril that can detect infra-red heat.  One species, the coral snake, is found in the Family Elapidae.  Elapids are some of the most venomous snakes in the world and include such animals as the cobras and sea snakes.  They differ from pit-vipers in that they have round pupils and small heads (not “diamond” shaped) and differ from colubrids in that they have straight hollow fangs for injecting venom.

Snakes do not chase people down; they are actually afraid of us and only bite in defense.  All snakes warn before they bite.  Some snakes will musk hoping you smell it and move away.  Most snakes will shake their tails; often against dead leaves to make a rattling sound.  Many will make themselves look larger by opening their mouth wide or by flattening out their head and/or body.  They do not want to bite; they bite as a last resort. 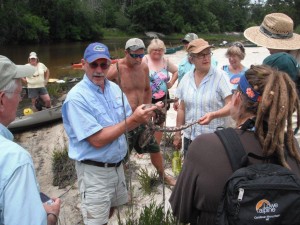 To celebrate “THE YEAR OF THE SNAKE” we will be posting articles on different snakes found in Northwest Florida each month over the course of 2013.  If you are interested in more information, contact Rick O’Connor at roc1@ufl.edu or call 850-475-5230. This month’s Snake Pictures are rattlesnakes! 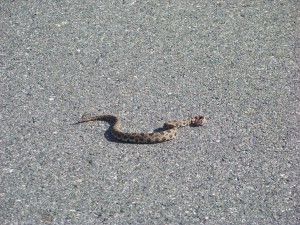 The smallest of the rattlesnakes is the pygmy. It’s also the smallest venomous snake in Florida. Despite it’s size, it’s capable of holding it’s own when it feels threatened. Photo courtesy of Molly O’Connor