Oysters are like snakes… you either like them or you hate them.  You rarely hear someone say – “yea, their okay”.  It’s either I can’t get enough of them, or they are the most disgusting thing in the sea. 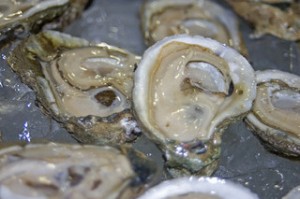 That said, they are part of our culture.  Growing up here in the Florida panhandle, there were oyster houses everywhere.  They are as common on menus as French fries or coleslaw.  Some like them raw, some like them in gumbo or stews, others are fried oyster fans.  But whether you eat them or not, you are aware of them.  They are part of being in the northern Gulf of Mexico.

In recent decades the historic oyster beds that supported so many families over the years have declined in production.  There are a variety of stressors triggering this.  Increased sedimentation, decreased salinity, overharvesting, not returning old shell to produce new reefs, and many more.  The capitol of northwest Florida’s oyster coast is Apalachicola.  Many are aware of the decline of harvest there.  Certainly, impacted by the “water wars” between our state and Georgia, there are other reasons why this fishery has declined.  I had a recent conversation with a local in Apalachicola who mentioned they had one of their worst harvest on record this past year.  Things are really bad there. 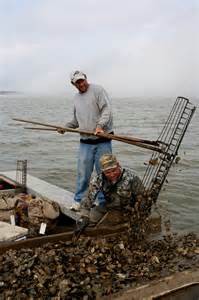 An oysterman uses his 11 foot long tongs to collect oysters from the bottom of Apalachicola Bay
Photo: Sea Grant

Despite the loss of oysters and oyster habitat, there has not been a decline in the demand for them at local restaurants.  There have been efforts by Florida Sea Grant and others to help restore the historic beds, improve water quality, and assist some with the culture of oysters in the panhandle.

This group has been together for a long time and have worked hard to educate and monitor our local waterways.  In 2018 they worked with a local oyster grower and the University of West Florida’s Center for Environmental Diagnostics and Bioremediation to develop an oyster garden project called Project Oyster Pensacola.   Volunteers were recruited to purchase needed supplies and grow young oysters in cages hanging from their docks.  Participants lived on Perdido, Blackwater, East, and Escambia Bays.  Bayous Texar, and Grande.  As well as Big Lagoon and Santa Rosa Sound.  The small, young oysters (spat) were provided by the Pensacola Bay Oyster Company.  The volunteers would measure spat growth over an eight-month period beginning in the spring of 2018.  In addition, they collected data on temperature, salinity, and dissolved oxygen at their location.

After the first year, the data suggests where the salinity was higher, the oysters grew better.  Actually, low salinity proved to be lethal to many of them.  This is a bit concerning when considering the increase rainfall our community has witnessed over the last two years.  Despite an interest in doing so, the volunteers were not allowed to keep their oysters for consumption.  Permits required that the oysters be placed on permitted living shoreline projects throughout the Pensacola Bay area. 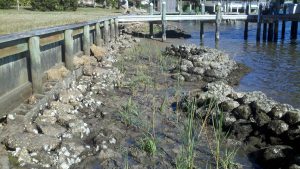 We all know how important oysters are to the commercial seafood industry, but it turns out they are as important to the overall health to the bays ecology.  A single oyster has been reported to filter as much as 50 gallons of seawater an hour.  This removes sediments and provides improved water clarity for the growth of seagrasses.  It has been estimated that seagrasses are vital to at least 80% of the commercially important seafood species.  It is well known that seagrasses and salt marshes are full of life.  However, studies show that biodiversity and biological production are actually higher in oyster reefs.  Again, supporting a booming local recreational fishing industry.

This project proved to be very interesting in it’s first year.  BFA will be publishing a final report soon and plan to do a second round.  For the oyster lovers in the area, increasing local oysters would be nothing short of wonderful.